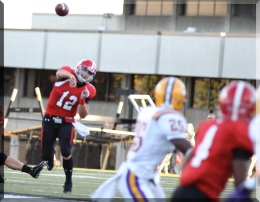 YSU quarterback Kurt Hess attempts a pass during Saturday’s win against the University at Albany. The Penguins host the University of Northern Iowa on Saturday at 7:05 p.m. Photo by Dustin Livesay/The Jambar.

Kurt Hess, both a quarterback and a Youngstown State University Homecoming King candidate, hasn’t voted for himself and doesn’t plan to.

Hess said he doesn’t care if he wins or loses the crown. He only has one thing on his mind.

On Saturday at 7:05 p.m., the No. 3-ranked Penguins (3-0) host the No. 8-ranked University of Northern Iowa (1-2) at Stambaugh Stadium in a highly anticipated matchup that will be televised on ESPN3.

“It’s a big game on our schedule,” Hess said of the matchup, which will open Missouri Valley Football Conference play for YSU. “We know coming in, especially this being our first conference game, that we’re going to have to be on our stuff this week.”

And rightly so, said head football coach Eric Wolford. Although UNI holds a losing record, its losses came against Big Ten Conference teams: the University of Iowa (27-16) and the University of Wisconsin-Madison (26-21). The Panthers defeated Central State University, 59-0, for their lone victory.

“It’s not hard to see that they’re a good football team,” Wolford said. “They’ve had two difficult games with Wisconsin and Iowa, but they played very well in both games. Physically, they’re impressive, and we look forward to having them at our place.”

YSU also looks forward to the opportunity to snap its 11-game losing streak against UNI. Last year at the UNI-Dome, the Panthers defeated the Penguins, 21-17, and in 2010 at Stambaugh Stadium, UNI won, 34-30.

“The last few years we’ve had some close games,” running back Jamaine Cook said. “We just want to show that we can put the icing on the cake, finish and finally beat Northern Iowa.”

The Penguins expect to get some help from what they are anticipating to be a sold-out crowd.

“The crowd is like the fuel for an engine,” Wolford said. “When they’re revved up and going, that gets us going. … Hopefully, we’ll be the loudest we’ve ever been.”

While the Ice Castle wasn’t exactly sold out this past Saturday against the University at Albany, the Penguins needed all the crowd support they could get. Withstanding a tough test against the Great Danes, the Penguins held on for a 31-24 victory.

“It showed us that we can’t look over our opponents or underestimate guys,” Cook said. “We have to come out every game and play four quarters and be hungry.”

From the sounds of UNI’s head football coach Mark Farley, the Panthers will come to town as a hungry football team. Farley dubbed the game as a “must win” for his team.

Meanwhile, Hess said it is also a “must win” for YSU.

“I think it really is,” he said. “I think it’s going to be huge for us to see what kind of competition we’re going to face, especially the young guys and the other people who haven’t been here.”

And although Wolford wouldn’t make any predictions for what is being called “the biggest game of the year,” he was willing to give his outlook on the Homecoming King election.

“You know how those quarterback guys are,” Wolford said. “Those guys get a lot of attention. So, [Hess] will probably just get it by being a quarterback.”