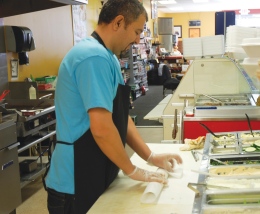 Ibrahim Jafar rolls a gyro at the Downtown Circle. Al Adi is opening a new convenience store on Elm Street in May. Photo by Chris Cotelesse/The Jambar.

Al Adi — owner of Downtown Circle, the deli and convenience store on West Federal Street — is in the process of opening a new store by the dorms.

In addition to supplying staple foods, Adi said the store will provide fresh produce and offer Mediterranean meals made daily.

For the past five years, YSU student Dorlan Curtis has lived in the university’s dorms and in apartments north of campus. He said a new campus dining option is long overdue.

“The traditional concepts of fried foods, pasta, subs and pizza are pretty old and mundane,” Curtis said. “But this introduction of the new store makes the dining experience modernized, healthier and more attractive to various consumers. … Unfortunately, I wish that this dining concept was initiated much earlier in my college career, because I have visited other university campuses around the area that already offer similar options.”

Adi intends to address these issues with his new store.

“The dorms need something unique, clean and healthy. Up by Belmont has nothing. Fifth [Avenue] has nothing. Something needs to go in on that side of town,” Adi said.

Adi has been in the business of serving Youngstown’s North Side for the past two decades. He’s previously owned gas stations, but the downtown convenience store is his first endeavor in the food service industry.

“I’ve been in Youngstown for a long time,” Adi said. “I know all the people, and they deserve to have access to fresh food.”

The new store, which will open on or before May 1, is at the corner of Madison Avenue and Elm Street, or where R & S United Family Foods was once located.

It will be roughly twice the size of Adi’s Downtown Circle. The store, along with providing the traditional features of a convenience mart, will include a deli, juice bar and a large cafe area with free Wi-Fi.

Adi said he tries to keep his produce fresh and local, but he sometimes has to drive to Cleveland markets for fruits and vegetables. Adi said his food is never processed or frozen, and the Mediterranean meals — which include vegetarian dishes like hummus, tabbouleh, Jerusalem salad, grape leaves and falafel — are made daily.

He said he believes that healthful eating options and fresh foods benefit students, many of whom have concerns about safety in the Wick Park area.

Students like Curtis say they avoid the area north of the dorms, or around Wick Park.

But Adi said he will do everything he can to make his store safe and add stability to the neighborhood.

The building’s design will feature an all-glass front to showcase the “clean, renovated” inside. Outside, ample lighting and a “well-lit” parking lot will brighten the outskirts of campus.

Adi has already spoken with YSU Police and the city’s police department about patrolling the area.

“When people see a well-lit, clean area with lots of security, it will make them think twice about doing anything unsafe near or around the store,” Adi said.