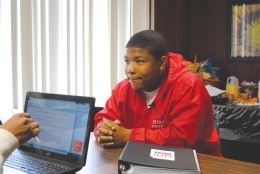 Sidney Hill, brother of murder victim Jamail Johnson, is following in his brother’s footsteps — all the way to the Dominican Republic.

On Feb. 6, 2011, Johnson was shot and killed while attending an off-campus fraternity party. Now, his 16-year-old brother wants to carry on his legacy by sharing some of his most prized possessions with the less fortunate.

As members of Christian group Teen Straight Talk, Sidney Hill and five others will travel to Barahona, Dominican Republic, to minister and distribute more than 100 pounds of hats, 200 pounds of tennis shoes, 35 audio Bibles and 50 pounds of candy.

The trip, appropriately named A Walk in My Shoes, will last from Saturday to May 12.

Johnson collected more than 100 pairs of shoes and a surplus of hats during his life. The Hill family donated 10 pairs of his shoes and seven hats to the mission. Sidney Hill also donated a pair of shoes that he grew out of.

“Instead of having them at the house, why not bless somebody less fortunate than me?” Sidney Hill said.

Shirlene Hill, mother of Sidney Hill and Johnson, said Johnson would be “so proud and humbled” that his love is being spread across the world. She said Johnson shared a general love for people.

No better person exists than Sidney Hill to carry on his brother’s legacy, Shirlene Hill said.

“To me, Sidney is a carbon copy of Jamail. I know Sidney is going to go over there and be just what Jamail would want him to be because him and Jamail were so close,” Shirlene Hill said. “Before we even thought of A Walk in My Shoes, he was trying to walk in Jamail’s shoes — ever since he was in this world.”

Shirlene Hill said she hopes that Sidney Hill will come home with a renewed sense of appreciation. She said kids his age tend to take for granted what they are given, and seeing children less fortunate will remind him how lucky he is.

She said her main hope is that he will share his experience with others.

“I always spoke to Jamail and Sidney and my oldest son Bruce about being leaders and not followers,” Shirlene Hill said. “I want him to come back and share his testimony with his friends at Liberty School, church. Anywhere he goes, I want him to be able to share with young people.”

Mary Duke and her husband created Teen Straight Talk 26 years ago to educate young girls about teen pregnancy. As the need grew, Mary Duke said the organization continued to address the issue.

The group has gone on four mission trips to various places in Africa, as well as St. Lucia in the Caribbean. Mary Duke said the group’s message could reach everyone.

“Because our message is truth, and it transcends all generations of the family, we are going to target it to every sector of the family,”

Doran Duke, an internal medicine resident at Mercy Hospital in Chicago, will be traveling with the group to perform basic checkups, provide educational medical slides, uncover cases of untreated diabetes and supply medicine.

Although his medical education is extensive, Doran Duke said he would be limited with supplies. He plans to get assistance from everyone involved.

“Everybody has something to give, and no matter what level you’re on,” Doran Duke said. “It’s not an isolated thing, so I’m not doing this by myself, and I will be recruiting people.”

Mary Duke said she has always wanted to incorporate young people with mission trips to expose them to ministry, and she is excited to see what Sidney Hill will contribute.

“Sidney has got a heart to help people to share. I think it’s going to be fantastic. I’m really excited about him, and he’s a wonderful, smart, intelligent young man,” Mary Duke said.

Shirlene Hill said she is humbled that Teen Straight Talk and Mary Duke are allowing Sidney Hill to be a part of something so big at such “a precious time in his life.” She said she is honored that her son’s shoes are making it to the Dominican Republic.

“Jamail had a very giving heart, and he would want this. He wasn’t stingy; he was loving, kind, generous, caring,” Shirlene Hill said.

“So, for someone to not have, Jamail would take his shirt off his back. He would be overjoyed. It’s all about giving, and it’s not all about receiving.”