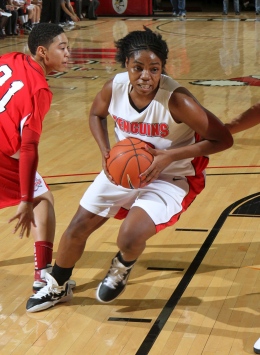 Junior Brandi Brown received the Horizon League Preseason Player of the Year award on the same day the Penguins were ranked last as a team. Photo courtesy of YSU Sports Information.

With 10 days before the 2011-2012 opening tip, junior forward Brandi Brown is hungry. During the off-season, she was served a Horizon League Preseason Player of the Year accolade.

That same day, another announcement was made that not even Brown expected: The Penguins were predicted to finish last in the Horizon League.

“I’m definitely disappointed that our team is ranked last,” Brown said. “I think that we’ve been working really hard. I think that is really disappointing, but there’s no success without any adversity.”

Brown added that being last has her asking the waiter for another portion.

“As soon as you stop being hungry, that’s when you get eaten,” Brown said. “We’re just planning on staying hungry. This just adds more motivation to the success we want to have for this program.”

“Brandi is a very humble player,” Boldon said. “She’s a kid that never really aspired [to] being player of the year.”

“I think the most amazing thing … is [that] she adapted to a completely different style of play from being in the post to moving in the perimeter,” Boldon said.

Brown said she faces added pressure as the best player.

“We think she’s more dangerous outside, and that’s usually where we use her,” Boldon said. “The majority of the things she does is facing the basket. Being a post player allows her to use her quickness and mobility to get rebounds instead of just trying to outmuscle people.”

Boldon said he is concerned, however, about keeping her fresh.

“We need to get her down to a manageable number,” Boldon said. “I don’t know what that number is, but 40 is too much. She’s best when she’s fresh.”

However, there is another “40” Boldon said he’s comfortable with.

“For us to be successful, she probably has to touch it like 40 times a game,” Boldon said. “She doesn’t need to shoot it 40 times a game, but Brandi gets a lot of attention. She makes pretty good decisions, and I think she’s getting better at that every day.”

Boldon added that Brown has little to improve on in her game because she has few weak points.

“I think some of her weaknesses might have been contributed to her fatigue,” Boldon said. “We definitely want her to continue to improve like we do with all of our players.”

Brown hails from Pomona, Calif. Her teammate, senior Macey Nortey, is also from California. Nortey said she was ecstatic to hear about Brown’s accomplishment.

“It’s nice to know someone is recognized on your team,” Nortey said. “It’s like a domino effect. When we’re all going, it all works.”

Both players said all members of the team are meshing, but Brown and Nortey have a different relationship.

“I think in some aspects me and Macy are closer,” Brown said. “On the court, it’s nice to know that we were on the same court at some point, and now we’re here together. She knows what I miss.”

Nortey said it’s a unique relationship that can’t be seen by others.

“Sometimes me and [Brown] have a different connection that people can’t understand or even see, so it’s nice,” Nortey said.

The Penguins finished last season with a 4-14 record, which included a 34-game losing streak.

“We’re just going to fight more, grind it out each and every single day, [and] just realize what we’re here to do,” Nortey said. “Now it’s time to show everybody what we’ve been working on. If they want to rank us last, OK. We just got to suck it up.”