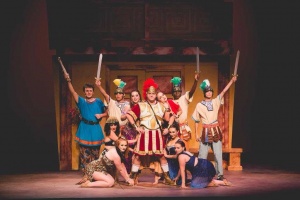 The department will feature a variety of shows over the school year, including a musical comedy, a world premiere play, a dance ensemble concert and an opera.

“The shows that we’re doing this year are really putting us right in the 21st century,” said Matthew Mazuroski, the department’s chair. “We’re celebrating a female playwright with a play that was written in 2008, ‘Dead Man’s Cell Phone,’ by Sarah Ruhl.”

“Dead Man’s Cell Phone,” opening on Sept. 29, is a modern comedy about picking up the loose ends of an unfinished life. Mazuroski and his colleagues wanted to do more contemporary shows this season.

“It’s the kind of stuff our students are going to encounter when they go out into the working environment,” Mazuroski said.

Following that motivation, the theater department is performing “Spring Awakening,” a Tony Award-winning musical by Steven Sater and Duncan Sheik.

“I think the subject matter that it deals with is also something that the students who come and see it and the students who are participating in it can identify with — this idea of sexual awakening,” Mazuroski said.

The last theater production for the department this season will be “Mr. Wheeler’s,” a new play by a Boardman native, Rob Zellers.

“‘Mr. Wheeler’s’ really is a play that resonates with a lot of Rust Belt cities and the young people who were growing up in those cities because it asks the question, ‘Can you make a life here?’,” Mazuroski said. “and I think it’s a question on a lot of people’s minds.”

The department’s February production of “Mr. Wheeler’s” will be the world premiere of Zellers’ play, he said.

“He is going to be here on campus workshopping it with us as we put it together, and we’re really excited about that,” Mazuroski said.

After the theater season ends, the YSU Dance Ensemble’s 27th annual dance concert will open on April 5 and run through April 7. Christine Cobb, director of the dance ensemble, said they have a variety of 10 to 12 pieces from different genres.

“Each choreographer has a different idea or theme that they want to work on,” Cobb said.

Katherine Garlick, professor in charge of costume design for the shows, said the dance ensemble performers collaborate with other students within the department to create their costumes and design the lighting for each individual performance.

“Dancers will often have very strong ideas about what kind of look will complement their choreography,” Garlick said. “The best collaborations happen when the choreographer and designer are able to toss ideas back and forth and develop the final costume design with input from both parties.”

Dancers must also choreograph the movements they intend to perform, a process that can be very personal to students.

“One individual might be concerned with oppression and might do a piece on that,” Cobb said. “Loss, healing, feeling invisible and needing others to see you, somebody might be feeling lost and finding themselves or a societal issue.”

One of the performances in the dance ensemble concert will take inspiration from the events in Charlottesville.

The YSU Dance Ensemble is a student organization and they will be holding auditions starting Sept. 10 from 10:00 a.m. to noon and 5:00 p.m. to 6:30 p.m. Students, staff and faculty can audition even if they aren’t dance majors or minors.

This season marks the 54th consecutive year university theater at YSU has existed as a theater-producing agency on campus.

Season subscriptions are $60 for adults with discounts available for members of the YSU Alumni Society, Penguin Club and Regional Chamber, as well as YSU faculty, staff, retirees and non-YSU students.

Subscriptions are available now through the University Theatre Box Office by calling 330-941-3105 or emailing lafactor@ysu.edu. YSU students can attend all the season’s performances for free.