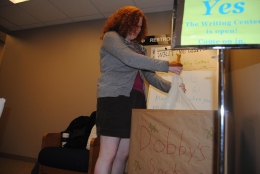 Room of Requirement President Fiona Kelly drops off clothing donations in the basement of Maag Library on Monday. Photo by Kacy Standohar/The Jambar.

“When kids read books, the book is their friend, so that’s why I am shy,” she said.

The inhibition sometimes remains, but the Room of Requirement club on campus allows Santangelo and her peers to come together with a mutual enjoyment of the “Harry Potter” books.

The Room of Requirement, a chapter of the Harry Potter Alliance charity organization, uses lessons learned in the “Harry Potter” books and applies them to charitable causes in the local area.

“Giving to others and being selfless are what we put toward the community to give back,” said Fiona Kelly, the club’s president. “We want to treat others well and do the right thing.”

Kelly and Santangelo organized a way to incorporate their favorite “Harry Potter” characters with community philanthropy.

“Dobby is a character in ‘Harry Potter’ who has a terrible life,” Santangelo said. “But when Harry gives him a sock, he is freed from his slavery.”

Essentially, that’s the idea the members of the Room of Requirement have for their clothing drive — helping those who are less fortunate.

Donations will be accepted through March 6 at campus drop boxes.

During their Wednesday meetings at 7 p.m. in Kilcawley Center’s Jones Room, members read parts of the books, answer trivia for points and plan events. The Room of Requirement continues to plan fundraisers, events and even outdoor quidditch matches.

Kelly said she and most members follow a lot of the books’ teachings throughout their meetings and events.

Both Kelly and Santangelo said the club gives them the opportunity to meet people they normally wouldn’t.

“It’s how I met all of my friends, because I am pretty shy,” Kelly said. “The best part about joining an extra curricular activity is the friendships that come out of it.”

Santangelo said leading a group and planning events hasn’t been difficult despite her shyness.

“We have some outgoing people, some shy and some in between. We’ve done many different service events ranging from helping a library run a children’s event to book drives,” she said. “Most people come into college a little scared, and I think joining a group and making friends helps people feel more comfortable in their own skin.”

Santangelo added that she thinks leading a group can be a challenge, regardless of personality.

“I think leading a group teaches people how to use their strengths and overcome their weaknesses,” she said. “But we’re a quirky group.”