The revamping process in downtown Youngstown is being continued through various arts and entertainment venues, including Youngstown Cinema. Located on the third floor of the Knox building above The Federal, Youngstown Cinema features an array of movies from independent and vintage films to movies created by local filmmakers.

The last film shown was “Suspiria,” a 1977 horror film. Directed by Dario Argento, the film follows a young woman who travels to Germany for ballet school and finds herself distraught when people at the school are murdered.

Aspasia Lyras, the founder of Youngstown Cinema, said she’s been in the space for about two years. Prior to being above The Federal, Lyras has screened films at the Erie Terminal and Cedars, which is now closed. She’s hoping her current location remains permanent.

“I love this space because it’s still downtown and it’s in the middle of everything,” Lyras said. 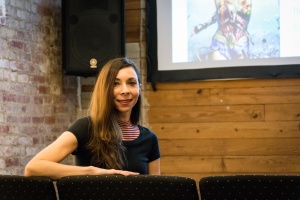 Lyras also runs summer films outside of the Covelli Center. The largest crowd she pulled for the event was roughly 400 people when she showed the film “Jaws.” Lyras said she wants the showings to be more of a social event than to just people going to see a movie.

“I try to do this by showing films that are hard to find or local and creating a setting that allows people to converse a little more,” Lyras said.

She said it will be more convenient for local filmmakers to present their work at Youngstown Cinema instead of having to travel to present a film. She said if the films are about Youngstown, they should be presented in Youngstown.

Lyras’ husband, Richard Elmsworth, said the space is multipurpose and can seat about 50 people. Elmsworth said they’ve used the space for art shows and for their wedding ceremony.

The owner of the building, Jacob Harver, said a theater on the third floor is always what he wanted and after a few years of restorations to the space, he feels it is beneficial to downtown and how it is perceived.

“I want to make this building a cultural destination not just for Youngstown, but for Cleveland and Pittsburgh as well,” Harver said.

Lyras also wants Youngstown Cinema to reach more people and said many other cities have venues showing older films, but she hopes Youngstown can still be itself.

“Youngstown shouldn’t have to turn into Cleveland or Pittsburgh to attract more people,” Lyras said. “It should stay Youngstown and be known for being a quaint arts and entertainment district.” 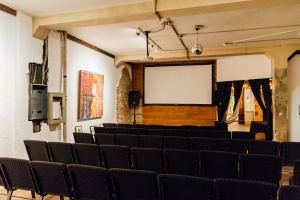 Youngstown Cinema screens films monthly. The next featured films will be the newest “Wonder Woman” on Nov. 10 and “The Room” on Dec. 2.