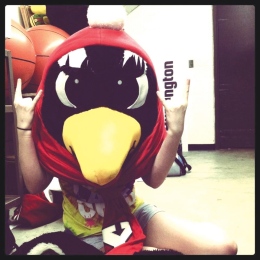 Freshman Caitlin Rhoads takes a break in the women’s locker room during a game. Rhoads is one of three sisters to wear the Penguin mascot suit. Photo courtesy of Rachel Rhoads.

Pete and Penny Penguin have exhibited their exuberance to students, faculty and staff at games and events for generations.

For freshman Caitlin Rhoads, Youngstown State University’s mascots hold a special place in her family’s heart. Pete and Penny have been in her life since she was in seventh grade.

Her older sister, Rachel Rhoads, was the first to start the mascot tradition in her family. Caitlin Rhoads is the youngest of three sisters, and each of them has worn YSU’s Penguin.

“My sisters did it, so I was really excited when I got to do it. I’ve always loved the mascots, and it’s tradition in our family,” Caitlin Rhoads said.

“Mrs. Markota asked Rachel and two of her friends to do it. I think Rachel mentioned it to Stacy, [Caitlin’s middle sister], and that’s how she got started,” said Beth Rhoads, their mother.

Caitlin Rhoads has benefited from the gig; she was the first of her sisters to receive a $1,000 scholarship for taking on mascot duties.

“I think they had to raise [the scholarship] to entice people to do it because it’s a lot of work,” Beth Rhoads said.

When Caitlin Rhoads’ sisters worked as YSU’s mascot, they received a $250 stipend and, in some cases, weren’t paid at all, Caitlin Rhoads said.

Many responsibilities come with being a mascot at YSU.

Appearances at football and basketball games are mandatory.

Event appearances, ranging from Scrappers baseball games to various children’s events around the Mahoning Valley, are also never out of the question.

One of the most challenging aspects of being a mascot is the suit’s limitations.

Visibility is limited due to the mesh covering over the eyes. The mascot head also limits the peripheral vision of those who wear it.

Caitlin Rhoads said the feet are a challenging feature because of their size, and they tend to get uncomfortable.

“The parade downtown was my least favorite event. I wasn’t prepared that we had to walk the whole time,” Caitlin Rhoads said.

Lynn Haug, retail operations manager of Kilcawley Center, was appalled when she learned that the mascots had to walk the entire duration of the parade.

“I was in charge of the parade for years, and I would have the mascots in a beautiful, white convertible where they got to sit on the back and wave,” Haug said.

Haug now utilizes the mascots for the annual “Take Your Child to Work Day” in Kilcawley Center. Pete and Penny pose for photos and participate in a storybook session with the children who come to the event.

Another hazard of being a mascot is the onslaught of children they face at events. Children of all ages and sizes have been known to kick, punch and climb on them. However, the occasional loving child will approach the mascots and make it worth the hassle, Caitlin Rhoads said.

“My favorite event that we’ve done so far was a cancer walk, and there were all of these little kids that were really excited to see us. They were really adorable; I love when little kids come up to us,” Caitlin Rhoads said.

Many advantages come with being a mascot at any university, but, at YSU, unique ones exist.

Mascots get free range to roam around at events without “handlers” or people who assist them. The mascots are allowed to go on and off the field during a football game at their discretion and interact with patrons in the loge suites in the stadium.

“I think watching them at football games was my favorite event that they attended. Stacy still talks about all of the events and how much fun she had,” Beth Rhoads said.

However, this is Caitlin Rhoads’ last semester as a mascot. She said a full year was enough for her as the lovable mascot. Time commitments and too many negative experiences were enough for her to step out of Pete’s shoes.

“It wasn’t what I expected. A lot of the older kids are really immature, and they push us. We try to ignore them, but it’s hard when they’re prodding you. Plus, there are two basketball games a week, and that’s really tough to try and go to all of them,” Caitlin Rhoads said.

“I’m very proud of them. I think it’s great that they got to be a part of YSU in this way; it’s a way to make connections,” Beth Rhoads said.