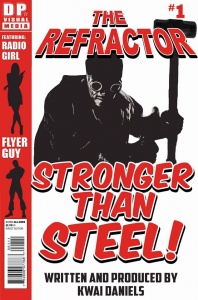 “The Refractor,” an independent action-superhero movie, is currently in production and will be shot entirely in the city of Youngstown using only local actors.

Kwai Daniels, the producer, writer, director and leading actor in “The Refractor,” said that the movie grew from a skit that was never meant to be a full movie, but from support during casting, the idea was expanded upon.

Daniels said that the story’s script is expanded when a new actor joins the cast.

“We have a little bit of liberty when it comes to scripting because we’re relying on friends and family to play all of the roles. We script people in as themselves, doing their daily routine or at work, but it ties into the overall plot,” Daniels said. “It makes it so people don’t have the jitters and aren’t nervous about acting.”

Daniels creates commercials for local businesses and produced a television show called “Let’s Go Youngstown.” He said that assisted him in filming the movie in Youngstown.

“Networking played a huge role with us choosing Youngstown. Most independent movies have a few locations, but we have 50, 60.” Daniels said, “I’ve worked with connecting local bands with these local businesses. A lot of ‘The Refractor’s’ scenes are within these local businesses and are overall greatly supported by them.”

Daniels said that the underlying story is about Youngstown. The history of the steel mills, how Youngstown has operated throughout the past few decades and how it is on the rise now will be major themes and scene in “The Refractor.”

“It’ll give you a lot of things that you can relate to. When you see Eddie Loves Debbie in the movie, you’ll say, ‘hey, I’ve seen that at one of these gas stations before,’” he said.

He said that the team is now working on the last quarter of the movie and seeking local celebrity cameos.

Daniels said he is also working on having local celebrities like lightweight boxing champion Ray “Boom Boom” Mancini and “Married With Children’s” Ed O’Neill appear in the film, if possible.

The film will feature local locations such as Mill Creek Park, Strikers Pizza Pub and Subs, Ironman Warehouse and The Federal.

“The movie’s trailer shows that we’ll be using aerial shots of Youngstown, and a there’s a montage involving a window cleaner, so you’ll pretty much be seeing every building in downtown Youngstown.” Daniels said.

Daniels, for the majority of the film, wants to show Youngstown as if it were in total collapse as a civilization that builds itself up during the third act with the help of the Refractor.

“There is a hero that rose to the top and fell and now he’s on the bottom, but no matter where he goes, he can’t stop being a hero. He’s not the type of character to send villains to jail, he’s more the type to break both of your legs, and if you keep on the wrong path, he’ll break both of your arms,” he said.

Daniels said this brutishness is what makes the people of Youngstown love him but also grow to hate him.

After “The Refractor’s” release, Daniels plans to have showings at the local businesses around Youngstown.

“I’d rather show it on a projector at Suzie’s than get it into a local theater,” he said.

Holly Shew, a consumer medication coordinator in Ravenna, Ohio, met Daniels on Facebook and approached him to act in the film. She had done a role in an Alzheimer’s disease documentary by UC Davis and brought her credentials to Daniels asking for a casting session.

“Kwai [Daniels] is bringing history and truth to the film through a comic book character, and I think that’s outstanding,” Shew said. “There’s a lot of crime in Youngstown, which makes having a superhero type figure to be proud of just that more important.”