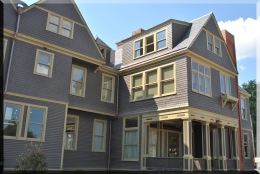 After two years of construction, the Porter and Mary Pollock House is ready to serve as a home for Youngstown State University President Cynthia Anderson and university presidents to come.

After two years of construction, the Porter and Mary Pollock House is ready to serve as a home for Youngstown State University President Cynthia Anderson and university presidents to come.

The once-dilapidated building on Wick Avenue was a $4.47 million project funded by private donations and proceeds as part of the YSU master plan.

Right now, the project is about $3,000 under budget. Shannon Tirone, executive associate to the president, said board member Scott Schulick made sure that not a dollar more was spent than needed to be.

“We’re pretty proud that we were able to stay within that,” Tirone said. “We were given a fixed number, and we stuck with it.”

Tirone showed Pollock House to the YSU Board of Trustees on Thursday. The project included new windows, roof, exterior siding, walls, flooring and painting. The elevator has also been restored.

“We wanted to restore and keep the history behind the building,” Tirone said.

The Pollock family gave the house to YSU when Mary Wick Pollock died in 1949.

Originally built by her father, Paul Wick, in 1893, the house was then used for YSU classrooms and offices.

Board member Harry Meshel said he remembers teaching classes in the building.

“Originally, it was a facility for the university to use anyway it could. … I taught classes in a couple of these rooms,” Meshel said. “It was used for a variety of functions, but then later it was converted to a dining room and a barroom and, like, a hotel.”

A private developer built an additional 64 rooms onto the back of the house and it opened as the Wick Pollock Inn in 1986. However, the inn closed 12 years later, and the structure hasn’t been used until now.

“The hotel looked like it was going to function really well, but it didn’t last … as long as it should have,” Meshel said. “I think it’s a tremendous improvement from what it was like, particularly because it’s going to be serving a different purpose.”

Although Anderson has a home in Liberty, Ron Cole, director of university communications, said her contract states that the Pollock House will serve as her primary residence.

After some deconstruction in the summer of 2010, Faniro Architects began supervision and renovation of the building in September 2011. “We knew that the end date was going to be somewhat flexible,” Tirone said. “We did run into concerns and some problems that you don’t know until you start tearing down some walls and such.”

Tirone said it was important to separate wants from needs. “As much as we wanted to keep the integrity of the older windows, unfortunately, it was so much cheaper to replace them than it was to refurbish them,” she said.

Other renovations included an attempt to replicate the original slate roof. Tirone said a slate roof was too expensive.

“We wanted to bring that back, but we couldn’t. … From the street, it looks like it’s still a slate roof, but it’s actually not,” she said. “A lot of research went behind those decisions to make sure that the quality of the product that we were going to get was … going to last many years for presidents to come.”

Tirone said the planning and reconstruction involved a lot of compromise. “We had to tweak what we wanted and what we were going to get at the end,” she said. “Some things we thought we had to have, and we realized we could live without them to make sure that this project stayed on budget.”

Tirone said the house and its refurbished gardens will host community gatherings, along with dinners for trustees and donors.

“The one thing we wanted to do was to be able to hold to its integrity. We didn’t want to try to turn it or to retrofit it into a modern building,” Tirone said.

“They don’t build houses like this anymore,” Anderson said.