The University of South Dakota managed to steal the victory from YSU late in the game after a sack on Penguins’ quarterback Nathan Mays at YSU’s 5-yard line to set up USD for a 29-yard field goal. USD sealed a 31-28 victory with that field goal.

MVFC rusher Tevin McCaster scored four touchdowns against USD. McCaster is second in the conference with 536 rushing yards and eight touchdowns. Those rank 14th and second in the entire Football Championship Subdivision (FCS), respectively.
It was a loss YSU head coach Bo Pelini holds close to the chest blaming himself for the lost, citing a lack of preparedness.

“We didn’t react, we didn’t make adjustments very well, we weren’t very efficient offensively on a number of drives,” Pelini said. “Too many boneheaded mistakes and it all adds up to a loss.” 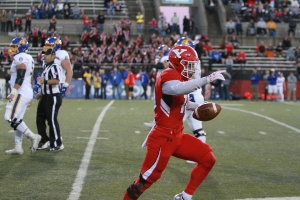 With time until the next contest, Pelini said he looks towards the fundamentals and finding success in the details as keys to winning the next game – something players will have to examine in the days leading up to their next game.

“Saturday was nothing we wanted at all but we came in on Sunday, watched the film, got it out of our heads and looked at what we needed to fix,” YSU safety Kyle Hegedus said.

Facing yet another tough match in the undefeated six-time champion North Dakota State, the Penguins will have a lot on their plate against a team that has outscored opponents by at least 27 points each game.

The play of NDSU’s quarterback Easton Stick and tailback Lance Dunn will be big concerns with their ability to pass or run coming into the game. Dunn leads the FCS with 12 rushing touchdowns.

“With every good football team it starts with the run game, but they can throw it and they can throw it efficiently,” Pelini said. “When you look at a team like this what makes them good in all areas is balance. I think they’re a very balanced team with good systems and they know them well. They’re a well-coached team.”

Despite the threat, the confidence levels are high coming into another Top 10 matchup at home.

“We respect them, but we don’t fear them at all,” Hegedus said. “Playing at home is really big and having the crowd behind our back is a lot better than them [NDSU] having theirs.”

Coming into this game, Youngstown State hasn’t won a home game against NDSU since 2008.

“You never want to lose at home,” YSU offensive tackle Justin Spencer said. “It’s something about losing at home that hurts a little more but we obviously wanna protect our home turf.”

The offensive line allowed six sacks against USD, which was more than the team had allowed all season. YSU only gave seven in the first four games. That is something Spencer and the offensive line look to improve against NDSU.

Youngstown State will suit up to defend the Ice Castle on Oct. 14 against North Dakota State at 7:00 p.m.