Ron Strollo starred as a football and baseball player at Austintown Fitch High School, but it was during his basketball season that Jim Tressel and the Youngstown State University Football staff took notice.

“Ron came to us shortly after I arrived at Youngstown State, and it was really at the beginnings of some real good recruiting classes,” Tressel said. “He was a good basketball player, and a good football player, obviously. He was a tremendous role model for his teammates. He excelled as a student. I think people admired how well he carried himself, how well he did things.”

During an unofficial visit to YSU in December 1987, Strollo said he knew YSU was the place for him.

“It was important to me to stay home, and to play in front of my parents, friends and family,” Strollo said. “[Tressel] used to bring a lot of recruits to their banquet in January, and I probably knew, even before that, this was the place I wanted to go.”

Strollo arrived at YSU in 1988. For him, the practices went faster, the competition got tougher and the expectations were larger. At Austintown, Strollo played an iron-man style of football- both offense and defense.

In high school, Strollo said he dreamed of a state championship. In college, Strollo said, Tressel was building a foundation to make that dream happen, albeit at a higher level.

YSU traveled to Kent State University in Strollo’s first game as a Penguin. Although they lost, he described it as a great experience.

The team improved from then on. In 1990, YSU ran the table; it was a perfect 11-0 season, until it wasn’t. During the first round of the playoffs, YSU lost to Central Florida 20-17.

“As we evaluated ourselves, it felt like we were thinking too much about the playoffs, and the championship game, rather than focusing on getting better,” Tressel said. “We just got caught up in the moment.”

For the 1991 season, Strollo was named team captain.

“It was amazing. When you’re young, you look up to those captains,” Strollo said. “To know your team voted for you, it was really special.”

The Penguins opened up the ’91 season strong, but two straight losses, one to Liberty University during homecoming week, put YSU at 4-3, with a road game against powerhouse Georgia Southern looming after the bye-week. The loss didn’t deter anyone.

“We really felt that we had our focus in the right place, and we were working on the right things,” Tressel said. “We really did a nice job not thinking too far in advance this time … We focused on the task at hand. The results took care of themselves.”

Strollo said the bye-week allowed the team to regroup.

“During the open week after Liberty, our younger guys got a lot better,” Strollo said. “Then, we went down and played Georgia Southern, who at the time was probably the modern day North Dakota State.”

Strollo recalled his most memorable moment as a Penguin, which came during the Georgia Southern game. On the road, YSU held a 19-17 lead. With the ball at their own 10-yard line, Strollo said the team needed to ice five to six minutes off the clock.

“I’m not sure that if we gave them the ball back we could have stopped them,” Strollo said.

On the drive, Strollo caught a third-down pass, and YSU converted two fourth-down plays to seal the victory. Georgia Southern never got the ball back.

According to Strollo, that victory gave the Penguins the confidence they needed.

Finishing the season off 8-3, YSU crept in the postseason. A clutch field goal from sophomore kicker Jeff Wilkins helped propel the Penguins past Villanova in the first round. Years later, Wilkins did something similar, this time in Super Bowl XXXIV. He kicked four field goals and two extra points to help guide the St. Louis Rams to a 23-16 victory over the Tennessee Titans.

A 30-28 victory against Nevada, and a 10-0 shutout of Samford put YSU in the national championship, against the Thundering Herd from Marshall University, a school which would produce talents like Randy Moss, Chad Pennington and Byron Leftwich, among many others.

The championship atmosphere was completely different for most players on the team. Marshall came into the ’91 national championship as title favorites. When the fourth quarter started, Marshall led YSU 17-6.

“It was pretty close for a stretch, but they had a really talented quarterback and began to pull away,” Strollo said. “We were a team that ran the ball a lot, but fortunately we connected on some big pass plays. We had a turnover late in the game, and we were able to score a touchdown to sort of put it away.”

According to YSU Sports Information, Strollo ended his YSU career with 27 receptions for 319 yards and four touchdowns. He was named 1991-1992 Penguin Male Athlete of the Year.

Strollo said it was always his dream to win a state championship. That dream became a reality in 1991. The reception back home was even more special, for both Strollo and Tressel.

“Coming home after that game, landing at Youngstown Airport, we literally couldn’t make it down the runway,” Strollo said. “We had police escorts coming back on the bus, and a parade through downtown Youngstown. It was a special time for the city … You could tell from the talent this team was going back [to the title].”

Tressel described the reception as unlike anything he’d ever seen.

“The region and the city had been through some tough times, with the steel mill closing,” Tressel said. “It was the first extraordinary event that happened in quite some time, and we got an unbelievable reaction.”

During his tenure at YSU, Tressel won three more national championships in ’93, ’94, and ’97, but first one holds a special place for him.

“The thing about the first one, it was an affirmation that we could accomplish great things,” Tressel said.

The ’91 title game, played at Paulson Stadium in Statesboro, Ga., still resonates with the Youngstown community, those who played and coached, as well as those who attended. Nicole Kent-Strollo was one of the Penguins in attendance. 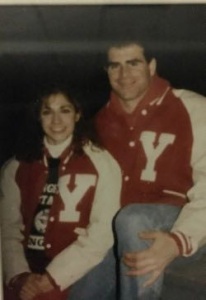 Kent-Strollo, a graduate of Ursuline High School, received a scholarship to run track at YSU.

“It was a really cool thing because [my] parents both went here … It was a new, exciting opportunity,” she said.

After she arrived on campus, she met her future husband, Ron Strollo.

Being a student-athlete posed challenges for Kent-Strollo, having to balance social life, school, work and athletics.

“For me, at the time, I was a nursing student, and I was also an RA,” she said. “Really, the challenges came with time management, trying to get work-outs in, traveling, competitions, school and work.”

While her undergraduate studies are done at YSU, Kent-Strollo faces different challenges today. She currently serves as YSU’s director of student outreach and support, as well as an assistant coach within the track and cross country program.

“Since I work with students who are struggling with a variety of issues, you never know what to expect on any given day. My current role with track and cross country has actually needed to become more administrative, since I can take care of a lot of those things late at night,” Kent-Strollo said. “While most days are really long, I’m just thankful for this amazing opportunity to help our students at a place I love.”

Kent-Strollo graduated from YSU in 1994. She obtained her master’s degree from Kent State University in 2002.

Currently, both Strollo and Kent-Strollo said they work to ensure student-athletes have the support to succeed both on and off the field.

Since 2001, Strollo has served as director of athletics. After graduation from YSU in 1993 with an accounting degree, he worked at Hill Barth & King. He returned to YSU three years after that as the business manager.

“I never dreamt of getting into college athletics, but there was an open spot as the business manager,” Strollo said. “I had such a great experience with great people here, so I didn’t want to pass it up.” 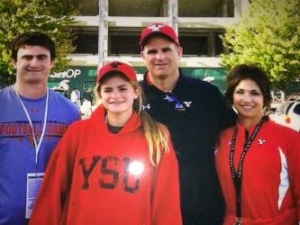 ited with Tressel, who left for the Ohio State coaching job in late 2000.

“It was fun. Obviously, [Tressel] had a lot do with it,” Strollo said. “It was great for our fans to see the helmets with Y’s on them, running onto the field at Ohio Stadium. I know it meant a lot to a lot of people, and we had the chance to do it twice. It was a special experience for those kids.”

In addition, Strollo said he envisions a bright future for the athletes, students,campus and community.

“You feel like you’re working in a place that really impacts the community,” he said.

Strollo currently resides in Austintown with his wife, Kent-Strollo, and their two children, Ryan and Rachel, both YSU students.