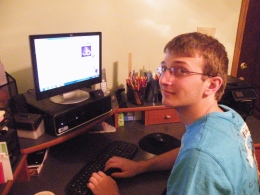 Josh Cool has a complex idea to simplify life.

In 2007, the former Youngstown State University student founded Jablu, a software development company with “multiple different departments merged into one.”

A three-pronged business model, Jablu is Cool’s first step to making user-friendly software even easier to use.

“What we try doing is … [take] an idea that already existed, like a Microsoft Notepad, and transform it into something more complex, but easier for the user to use,” Cool said.

One example is streamlining an HTML program to allow users to instantly see their work.

“Not even Dreamweaver lets you do that,” Cool said, referring to Adobe’s Web design software. “You still have to go ‘File’ and click a button … and open it up in a browser.”

Cool and his friends have already developed several applications and are working to sell them.

“We plan to have an online storefront this fall,” Cool said.

Second is Jablu Press, which acts as both the company’s home page and a blog site where Cool and his colleagues discuss technology news and promote podcasts.

Cool said he hopes to launch a new Jablu design soon. The new site, Cool said, will allow users to register, download Jablu products and get “a better understanding of what Jablu is.”

Cool said the third and final department will “change the whole education system.”

Called Jablu Aspire, Cool’s newest idea will allow students to “write and blog” class assignments. After an assignment has been completed and submitted, the teacher will post the assignment to the student’s Web page on Aspire for review.

After an assignment has been posted, users will be able to look at similar works.

“The cool thing about it is, instead of being just homework, it’s almost like they took the homework and put in on the refrigerator,” Cool said.

Cool said the traditional idea of homework “irritated” him.

“I always wanted my work to be shown. So, I came up with this idea, and other students can publish it, and their parents can look at it, their friends can look at and they can link to it,” Cool said.

What separates Aspire from YSU’s Blackboard system is the ability to connect students from various schools through their published work.

The next step for Jablu Aspire, which is still being developed, is to get the product to be used in schools.

Cool said he hopes the Ashtabula County Technical and Career Campus, or A-Tech, will be the first school to use Aspire. That’s where Cool spent his final two years of high school.

Dan Jackson, the secondary supervisor at A-Tech, said Cool has not yet approached the school about his product.

“I remember [Cool] very well,” Jackson said. “We haven’t been contacted yet, but that’s not to say we aren’t open to it.”

After spreading to high schools in northeast Ohio, Cool said he plans to bring Aspire into college classrooms and, eventually, to YSU.

“I really see this — especially Aspire — taking off in about three years,” Cool said.

Cool transferred to Kent State University’s Ashtabula campus due to financial issues after a fall semester at YSU.

“I had to take out a $9,000 loan for the year just so I could attend for that year,” CooI said. “I didn’t want to walk out in debt when I’m finished with school. I need to save every penny for Jablu.”

That doesn’t mean Cool has forgotten YSU, though.

“I still love it here,” said Cool, who lives in the Youngstown area.

Cool said he believes his product can succeed at all educational levels because of its wide variety of uses.

“There’s technical writing, there’s podcasting … and there’s also going to be a way … so [graphic design students] can upload and be recognized for the art that they made,” Cool said.

“Using something like Facebook, it will encourage students to share more,” Jadun said. “You need to go to where the students are, and [social networks] is where they are.”

One issue that Jadun foresees, however, is plagiarism.

“There has to be some kind of strict rules,” he said. “There should be a moderator in it, and it should follow the etiquette of academia.”

Jadun said he feels that “serious assignments,” such as quizzes and tests, should not be posted, and that the site should be used “more for discussion and exploring topics.”

Cool added that his Aspire program could be adapted to suit the needs of almost any type of class.

“I can take Aspire and re-form that educational platform that I built to [fit] any class,” Cool said.

He added that he hasn’t quite figured out how to make the platform work for classes like history or science, explaining that the product is aimed at subjects like writing and art.

As for the future, Cool has that worked out as well.

“I have notebooks just full of ideas,” he said.

These ideas, he said, could last him 40 years.