Youngstown State University students and community members endured the cold weather on Saturday to celebrate the last day of the 77th homecoming week. YSU faced Illinois State, which was accompanied by the annual parade and homecoming crowning. 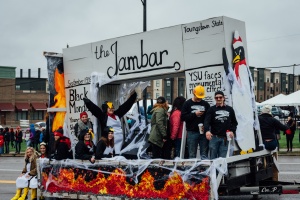 “The hardest thing was definitely building a framing,” he said. “It’s amazing to see everyone excited … It’s awesome,” Kosko said.

The float replicated an article of The Jambar, featuring a headline story on Black Monday and a steel mill in the center. Darian Mansell, chair of Alpha Xi Delta, said they focused on the design because of its impact on Youngstown history.

“The whole outside … is like a newspaper and we built an actual steel mill in the center. We actually have smoke [and] fire up the front,” Mansell said. “We are super proud of each other.”

In celebration of YSU’s 50th anniversary, YSU also unofficially broke a Guinness World Record for the largest group of people dressed as penguins. They set a new record of 972, which surpassed the previous record of 624.

“The Guinness event is an excellent example of communication and collaboration by multiple university departments, including alumni engagement, athletics, first year student services, marketing and communications, student activities and the WATTS center,” she said. “Everyone did a great job and it could not have happened without cross-campus support.”

Willie Parker and Tierney McCaster were crowned YSU’s 2017 Homecoming King and Queen during halftime at the football game.

McCaster said being crowned was a memorable way to end her last semester at YSU. She said it was difficult to keep up with her schedule during the election, trying to also balance an internship and ROTC training.

“I wanted to put our army ROTC program in the spotlight,” she said. “I would like to continue to shine light on all of the organizations that I am part of, and continue to represent Youngstown State University in the best way I can.”