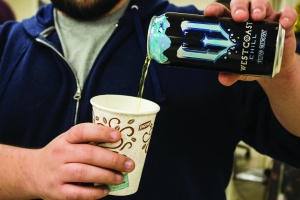 The Joseph family has lived in Youngstown for nearly 100 years. In the 1920s, the family owned a company in Youngstown called Star Bottling Group. The company distributed drinks such as Squirt and root beer in Ohio.

“It is a glorified vitamin drink if energy drinks did not exist,” Scott Berger, executive vice president of West Coast Chill, said.

During the growth in popularity of energy drinks, it came to Joseph’s attention that drinks such as Monster and Red Bull contain a high amount of sugar and caffeine. Joseph said he thought that was a problem.

“He wanted to create an energy drink that was healthier and that he would let his children drink,” Berger said.

West Coast Chill Pure Energy contains no sugar, no caffeine and no artificial sweeteners or flavors.

“It costs more to produce drinks without these ingredients, and the company makes less of a profit, but the drink has received great support from companies such as GNC and Walgreens,” Berger said.

West Coast Chill is the official energy drink of YSU. According to Rick Love, assistant director of Athletics, the drink is available at the concession stands at all Penguin Football and Men’s and Women’s Basketball games.

West Coast Chill is distributed by the Heidelberg Distributing Company. Berger says with hope of adding a new distributor in Ohio, YSU students can expect to see the drink coming to new locations near campus soon.

President Jim Tressel admits he is a supporter of West Coast Chill, saying that he prefers mixing the energy drink with iced tea before consuming.

“What I like most about the drink is that it is ours, being that Mitchell is a YSU alumnus. I am proud of him,” Tressel said. “I never drank energy drinks before this. I like that West Coast Chill has a softer taste.”