It isn’t necessarily a challenge to buy food and drinks on a budget in Youngstown. The Federal, Suzie’s Dogs & Drafts, Avalon and Christopher’s are all options for students who don’t want to spend more than $20 for a meal.

Sophia Martini, manager at The Federal, said they specialize in burgers. She said everything on their menu is $12.95 or less, which makes it nice because none of their items are overpriced, especially for students who don’t have a lot of money to spend.

“We have a variety of signature burgers that we sell on our menu and those are our most popular items,” Martini said.

Martini said The Federal also features different cocktails; some have been on their menu for several years as customer favorites. She also said new cocktails are always being incorporated.

“Our Youngstown Mule is very popular,” Martini said. “We also have a Federal Collins that is popular.” 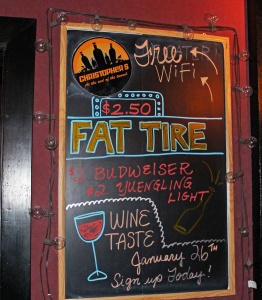 “We incorporate cool things during the week that make eating out fun,” Martini said. “You can have a good meal for a cheap price.”

Whitfield said there are at least 55 hot dog toppings to choose from. He said the roasted crickets catch people’s attention.

“Our white beer cheese is approachable, yet delicious,” Whitfield said. “Blueberry mustard I think is one of the things that caught my eye when I first started working here.”

He said at least once a week a customer orders all the available toppings on one hot dog.

“Even if you tip the server or bartender, you can get out of here under $20 easily,” Whitfield said. “It’s a unique restaurant.”

“Even if you took the food away, it’s really a good time,” Creech said. “You can always have fun at Suzie’s.”

Anne Massullo Sabella, manager at Avalon, said the most common thing ordered is pizza. She said the three most popular pizzas ordered include cheese and pepperoni, plain cheese or a Brier Hill which is a pizza with sauce, red and green sweet peppers and Romano cheese.

“Everything on my menu is under $20,” Sabella said. “We give students a 10 percent discount with a valid student ID, and we deliver to the university.”

Shawna Bonacci, owner of Christopher’s, said about two years ago, they changed their menu and added loaded baked potato, which is a popular item ordered during lunch and dinner hours. 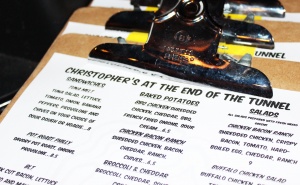 “We have everything from a classic with bacon, cheddar and sour cream and some fancier ones with pot roast, chicken and bacon,” Bonacci said. “As for drinks, a lot of the classic cocktails we sell a lot of.”

Bonacci said most of their menu items are $10 and under and beer starts at $2.50.

“Two people could eat and have a beer for $20,” Bonacci said. “Our bar is comfortable, and the crowd is really nice.”

If students have a gap in their schedule, there are several options downtown for an easy dinner on a budget.