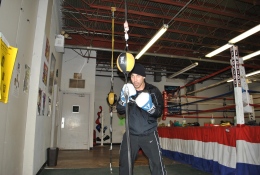 Jake “The Bull” Giuriceo trains on Feb. 11 in Youngstown at Ironman Warehouse. Giuriceo fights Jaime Orrantia on March 10 in Orange County, Calif., but it will not be for Giuriceo’s Universal Boxing Organization All-American Lightweight title. Photo By Joe Catullo Jr./The Jambar.

Keith Burnside watched as his young fighter threw punches in flurries similar to the snow falling outside the Ironman Warehouse gym in Youngstown.

Burnside, Giuriceo’s trainer, was referring to the March 10 bout that will match Giuriceo against Jaime Orrantia in Orange County, Calif., at the Doubletree Hotel.

Return of ‘The Bull’

This will be Giuriceo’s first fight since winning the UBO All-America Lightweight Championship belt in November.

Although he said he was happy with his success in 2011, Giuriceo (14-0-1) noticed a lack of aggressiveness while fine-tuning his boxing skills. As a result, he has made it his top priority to “bring back ‘The Bull'” in 2012.

“I want to get back to being ‘The Bull,’ which is a crowd-pleasing style that I have,” Giuriceo said. “It’s just that aggressive, coming forward, staying in a guy’s chest the whole time [style].”

Evidence suggests “The Bull” is, indeed, back. During a recent sparring session with Burnside, Giuriceo attacked with a high level of tenacity.

“That’s how we always fought — then we went into boxing,” Burnside said. “Now I want him to get in that pressure point. I want him to pressure every fighter. I don’t want him backing up.”

Giuriceo will not abandon his boxing skills, though.

“I feel like we’re right back where we started, only with 100 times more boxing skills,” Giuriceo said. “We’ve developed a lot, but we can also go right back to our roots. It’s a beautiful thing.”

Boxing hasn’t always been attractive to Giuriceo. As an amateur, he was rejected when Burnside sent him to other local boxing gyms.

“He just kept coming back,” Burnside said. “It’s sort of like these other gyms blew him off. All of a sudden, he started walking up my drive at 7 in the morning to work out every day.”

Burnside was tough on him so he could see how serious Giuriceo was about boxing.

Determined to prove himself, the walks turned into jogs, and the workouts became intense.

“This kid would do one-minute [boxing] drills. It’d be 90 degrees out in the summertime, and he’d be throwing-up,” Burnside said. “He’d tell me, ‘Stop the watch,’ go throw up, come back and hit the bag again.”

Burnside said that is when he realized he was training someone special.

“The kid got heart. I said, ‘This kid’s gonna be something one day.'”

Giuriceo’s heart can be traced back to his Campbell roots. Always in fights as a kid, he said the streets shaped his toughness.

“I got into a lot of trouble and a lot of fights, so streetwise, it turned me into a pretty tough kid,” said Giuriceo, a Campbell Memorial High School graduate. “That’s kind of how God used [the streets] to turn me into a boxer.”

Though the Campbell streets turned Giuriceo into a boxer, they did not form him into the man he is today.

“I think I got shaped into being a man when I gave my life to the Lord,” he said.

The Rev. Albert Yanno of the Youngstown Metro Assembly of God has assisted in Giuriceo’s life change.

“Whether it’s working or in the ring, working out, or working on his relationship with God, it’s all or nothing,” said Yanno, who met Giuriceo two years ago and said he considers him an inspiration.

“We kind of sharpen each other,” he added.

As for Giuriceo’s fight against Orrantia, Yanno is confident “The Bull” will take care of business.

“It’s hard to defeat Jake because he never gives up. He’s always on the attack in the ring,” Yanno said. “I don’t know much about the guy he’s fighting other than he’s very experienced.”

The Giuriceo team does not know much else about him.

“How do you say that guy’s name we’re fighting?” Burnside asked Giuriceo.

Still, they do consider him a dangerous opponent.

“I can just look at his record and tell that he has a lot of experience. He’s a durable guy,” Giuriceo said. “Them are the most dangerous kind of fighters, I believe. … I just got to be ready for anything.”

Time to ‘step up’

Giuriceo, 27, is ready for a promoter and is expecting two to be at the fight. Fourteen of his first 15 professional fights were either in or near the Youngstown area; a promoter could market Giuriceo nationally.

“We want to get him out on the road, fighting somewhere where nobody knows us,” Burnside said. “We got to start stepping it up.”

“I want to be presentable to anyone, anywhere,” Giuriceo said. “[The promoter] would say, ‘Hey, we got a fight for this title, do you want to go for it?’ because they know I’ll sell tickets anywhere, not just in Youngstown.”

Giuriceo said he would not overlook Orrantia, even with career-bolstering opportunities looming. Even so, Giuriceo said he’s in excellent condition and expects to leave Orange County 15-0-1.