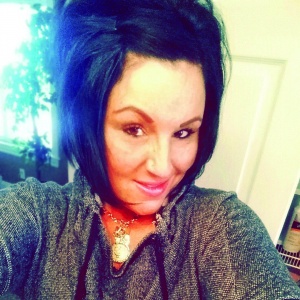 You would never guess because, unlike the 8,200 people who died from overdoses in 2013 according to the Centers for Disease Control and Prevention, Kashmiry was able to beat the disease and turn her life around for the better.

A Young Alcoholic — Soon to be Addict

Kashmiry grew up in New Springfield, Ohio, and like a lot of children and teenagers, she didn’t know exactly what she wanted out of life.

“I just knew that by a certain age that I wanted to have kids and a career and do something with my life. I wasn’t sure what though,” Kashmiry said.

As a freshman in high school, Kashmiry was introduced to alcohol but still managed to graduate. The escalation to heroin came at age 22 when Kashmiry’s boyfriend at the time introduced her to the drug.

“That was it, I just fell in love with it and didn’t think twice about doing it,” Kashmiry said.

During the eight years she was with her now ex-boyfriend, he regularly provided her with the drug.

“If he couldn’t get it for me — I mean, he always got it for me — but if there was a reason why he couldn’t, I got introduced to drug dealers early on so I could go and get it myself,” Kashmiry said.

Between her boyfriend and her own knowledge of drug dealers in the area, Kashmiry always had easy access to heroin. What began as one bad choice soon became a real problem.

“I wasn’t fazed by jail anymore, because I was going so much. So jail wasn’t like … I wasn’t scared of it. My overdoses didn’t scare me either. At that point in my life I didn’t want to live anyway,” Kashmiry said. “I had become an addict. I was a full-blown heroin addict. I couldn’t get my life together. I woke up every single day needing heroin. It was just no way to live.”

Although she made poor choices, her family always stood behind her.

“Anytime I got in trouble, my dad had the best attorney in town. I suffered very minor consequences,” Kashmiry said. “Even though I went to jail, my consequences were not as bad as they should have been because my dad was always helping me.”

When Kashmiry was approximately 32 years old, she realized her options had quickly run out.

“I was pregnant,” Kashmiry said. “I had no more options other than to get sober. There was nothing else for me to do except to die.”

Four months into the pregnancy, she had a relapse for two weeks. Fortunately, her now 6-year-old daughter Kylee was born happy and healthy.

Life After Addiction Is Possible

Since the birth of her daughter, Kashmiry has put her life back on track to accomplish her dream of having a child, having a career and doing something with her life.

“We are like best friends,” Kashmiry said. “I’m her mom first and foremost, but we go and do things together, and it’s easy. It’s easy being her mom most days. Mornings are rough, but most days it’s good to be her mom.”

After a year of sobriety, Kashmiry enrolled in Youngstown State University, where she earned a bachelor’s degree in social work in May. She plans to return to YSU to complete a master’s degree.

“I wanted to help people. I wanted to share my message with addicts and alcoholics to let them know that there’s hope. That it can be done,” Kashmiry said.

She would ideally like to work in a substance abuse treatment center, helping others out of a situation she was in not long ago.

Kashmiry said she really likes who she’s become without drugs in her life and feels she’s much better than she used to be.

“What I was doing before, I had to wake up and see who I was gonna rob, see who I was gonna steal from,” Kashmiry said. “Today, I just wake up, I get my daughter ready for school, I go and meet my best friend for coffee, I go to work, I take [Kylee] to dance.”

Today Kashmiry is an entirely different person than she was several years ago. She said the disease did not define who she was, because now that she’s clean she’s become a better person.

“It’s funny because my friends ask me to watch their kids and get them off the bus, and that would have never happened before. No one would want me near their kids before,” Kashmiry said. “It’s just nice that people trust me today.”

Kashmiry said addicts with children miss out on some of the most important events in their childrens’ lives, and she’s thankful to experience them with Kylee.

“Things like watching her hit a baseball for the first time, teaching her to ride a bike. [They will] never get that opportunity and it’s sad because they grow up,” Kashmiry said. “I thank God I have that experience with her, to watch her grow and be a good mom to her.”

A lot of strength comes from her daughter Kylee, keeping her anchored when she becomes overwhelmed.

“Her face pops into my head, and I know I can’t be weak when I want to be weak. I have to keep pushing forward because her little face is there,” Kashmiry said. “She never ever has to see me drink or use drugs.”

Kashmiry has taken her experience and turned it into a positive by using her own story to speak at her old high school about the dangers of drug and alcohol abuse.

She said walking into her high school for the first time, not as an alcoholic teenager but as a strong adult, gave her chills.

“The memories of high school came flooding back, and who I became is, that’s where I started,” Kashmiry said. “The alcoholic soon to be addict.”

In one of her talks with the students, she said, “I sat in the same seat as you and I could have been anything I wanted in my life, and I chose drugs.”

Kashmiry sees value in sharing her experiences with others.

“Just keeping it to myself isn’t going to help someone, so I figure if I can share with whoever, whenever, maybe one person out of however many I can help, that would be a reward for me,” Kashmiry said.

Looking back, she said she’s shocked and proud that she made it to where she is now.

In addition to speaking at high schools about the dangers of addiction, she is a certified Chemical Dependency Counselor Assistant.

“I can relate to people who just can’t stop. People get mad and say, ‘all you have to do is quit.’ No, it’s not like that. It’s not that easy,” Kashmiry said. “Some people will live and die an addict.”

Kashmiry said her experience may allow her to understand the feelings of an addict better because she’s been through it herself, but that doesn’t make her a better counselor.

Kashmiry lost a cousin to drugs. She said the end of heroin abuse is normally either suicide or overdose because addicts don’t know what else to do or are afraid to seek help.

“I guess if you’re in the field, you’re okay with it, but I was treated poorly when someone found out I was an addict. They refer to us as ‘those people,’ and we’re stigmatized,” Kashmiry said. “I understand, but it’s not who we are deep down inside.”

She said people struggle to differentiate between the disease and the person underneath.

Kashmiry said people focus too much on incarcerating addicts and dealers, and not enough on curing the problem by helping them become productive members of society.

“They’re thinking prison and jail is going to help them, but they need more help than that,” Kashmiry said. “They need to be introduced to jobs and places where they can go to make money [legally].”

With such a high death rate associated with addiction — not only with heroin — Kashmiry encourages anyone struggling with addiction to seek help as soon as possible.

“Seek treatment, seek professional help regarding addiction. Don’t wait, if they have an ounce of courage to stop doing whatever they’re doing, they need to take it and run with it,” Kashmiry said. “This disease definitely wants us dead, that’s for sure.”

According to studies, nearly 80 percent of past heroin addicts will relapse.

Kashmiry said she refuses to be one of them.