There is more to photojournalism than just taking pictures. Photographer David Hume Kennerly has been passionate about taking photographs for more than fifty years, documenting wars, politics and everyday life. 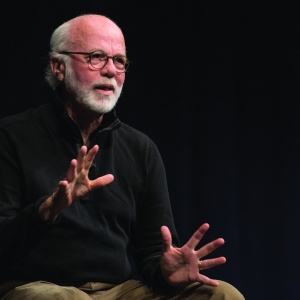 Kennerly won the Pulitzer Prize in 1972 for his work, which included photos of the Vietnam, Cambodia, the India-Pakistan Wars and the Ali-Frazier fight.

As a child, Kennerly traveled with his father, who worked as a salesman, and developed a desire to know what goes on in the world.

“I got interested of wanting to see what was over the next ridge,” Kennerly said. “That is part of what I have done with my life. The curiosity of wanting to know what is happening around the corner, which is what has driven me.”

He taught himself to take pictures and decided to make it a career after winning a contest in high school.

“That really lit the fuse, seeing a picture that I took published. From that point on, I wanted to be a photographer,” Kennerly said. “I wanted to be in the front row of history and see things happen and be a part of them.”

He won two first place prizes in a World Press photo contest for his pictures of the final days during the war in Cambodia, and he served as the White House photographer during the Ford administration, which granted him access to everything that went on.

“I always wanted to know what made people tick: by covering politics, the world’s leaders, why do they do what they do, getting behind the scene’s history, being in the room when history is being made, taking pictures of people who start and end wars,” Kennerly said.

He said things that don’t involve people do not interest him.

“Everything rotates around human activity. That’s what interests me most,” Kennerly said. “I like watching people do what they do everyday. I like the human interaction and what compels people to do what they do.”

Kennerly’s latest project is a documentary about former CIA directors that will be airing on Showtime this month.

“I have a fascination with people doing secret work, why they do what they do and what are the ramifications of their decisions. Important people every day make decisions that affect other people,” Kennerly said.

His TED talk will focus on the impact of photography on the world. He said photojournalism is an essential profession and there is an ethical responsibility that comes with the job.

“I want to talk not only about the impact that these pictures can have, but the importance of taking pictures. Why it’s important for people to know what is going around in the world by impartial informers that you can trust,” Kennerly said.

He said the prevalence of Photoshop and doctored pictures has created an ethical dilemma.

“Part of the problem we have today is that we are so suspicious of what is going on right now about whether a photograph is real or not. We need professionals to set the standards for ethics and truth,” Kennerly said.

He hopes that students will understand the importance of his profession and how to understand why certain photographs have impact.

“True photojournalists are able to give you pictures that you wouldn’t see otherwise and give you a better understanding of what is going on in the world,” Kennerly said. “Why do people risk their lives to take them? Why [have] so many photographers died in the line of duty trying to take these photographs? Why did they think it was so important?”

He said it is dispiriting that the world has not improved in many ways over the course of his career; people still kill each other, wars still happen, poverty still exists, but he still thinks pictures can make a difference.

“Images stick with you, and it changes people’s minds about what is going on around the world. Photography has always had an influence,” Kennerly said. “If you didn’t see the pictures, how would you make a judgement on what should be done?”

Kennerly adds that he is not out there to make judgments — people have to make their own decisions and interpretations of his work and career.

“Pictures that portray real historic events let you make those judgements and decide how you feel, which you might not do otherwise if the picture was never taken,” Kennerly said. “The best photographer is the one that lets the picture tell the story.”