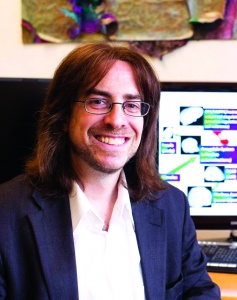 Greg Siegle, director of the program in cognitive affective neuroscience at the University of Pittsburgh School of Medicine, is trying to understand the mechanics behind mental disorders and how to better treat them in the future.

“In Brown [University], my class was the first class to graduate with a cognitive science degree. After that, I worked in artificial intelligence for a while and then I wanted to see how I could apply that to helping people,” Siegle said. “My Ph.D. ended up being in clinical psychology, with my focus being in neural modeling for clinical disorders.”

His research examines the neural basis of emotion and thinking in mood and anxiety disorders. He is also trying to see how this information can be used to predict responses to validated treatments and to guide novel treatment development.

Siegle’s involvement in the field stemmed from his work with artificial intelligence.

“When I was working in artificial intelligence, I asked one day what the work I was doing was going to be used for and they said, ‘Oh, don’t you know it is being used to make more accurate missiles?’ And I realized my work was being effectively used to kill people better,” Siegle said. “I had to get out of there. My reaction was, ‘How can I use this for good?”’

He was inspired by a colleague while attending graduate school at Northwestern University.

Siegle wants to find out why people think of negative things and how to interrupt those thought patterns.

“For the last fifteen years, we have been looking at this question in terms of why people ruminate, and we have been looking at some brain areas and seeing which ones turn on and off when people are thinking about negative things,” Siegle said. “We are working with some treatments that could possibly shut some of those areas off, and we are excited about that.”

Siegle’s TED talk is going to dive into his research and explore how our brains function.

“Treatments for mental disorders are really geared towards shutting down overactive brain mechanisms,” Siegle said. “You take pills which help you to not be so emotional, you do psychotherapy which teaches you to down regulate emotions, and they tend to work like half the people you give them to.”

According to Siegle, these treatments tend to work best with highly emotional people, so he is exploring treatment for people who are not so in tune with their emotions.

“What if we went in the other direction? What if we paradoxically increased people’s emotions when they are depressed, or anxious or have another mental disorder? Somehow when people go parachuting or hang gliding or they go into a haunted house, they feel great afterwards. If we can understand what is going on there, we can apply that into helping people,” Siegle said

In his TED talk, he’ll be looking at studies he’s done looking at brain reactions of people engaging in meditation or sexual activities. He’s trying to understand how mental disorders work.

“There is so much phenomena that could be attributed to why you are feeling bad, and the science in psychiatry at this time is just not precise,” Siegle said. “In any other disorder, you go into the doctor’s office and they do a test, and it gives you a treatment that stresses what’s wrong on the test. In psychiatry, they don’t do that.”

Siegle said he hopes that his talk will help students understand how treatments for mental disorders work, and how we can make them better.

“Treating mental disorders is not one size fits all. We should do assessments first,” Siegle said. “Lesson 1: we have to assess people in their brain mechanism in psychiatry before doing anything else. Lesson 2 is that shutting down emotions is not always the answer. Lesson 3 is that we do have new methods in the horizon which will look nothing like current psychotherapy or medication.”

Siegle said times are changing when dealing with mental disorders, and it’s moving in the right direction.