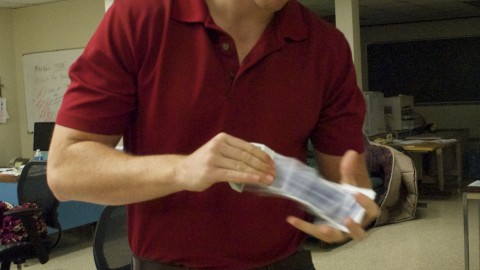 Students, faculty and Youngstown residents will be in for quite a show when Jason Alan, a full-time magician, takes the stage at Ford Theater as part of the TEDx Youngstown event on Jan. 23, 2015.

Jason Alan was a Youngstown State University graduate originally from Salem, Ohio. He came to YSU in 2003 on a track and field scholarship and graduated in 2008 with a bachelor’s degree in general studies.

“I had always done magic since I was 13 and performed. I used to actually practice on campus. I’d go to all the parties back then because I didn’t drink, but then I would entertain all the frat guys that drank. So then if I messed up nobody would know,” he said.

To differ from the usual presentation of TED talks, Jason Alan explained that during his talk, he and his wife, Stacy Alan, will be performing a magic show with a twist — the role of magician and assistant will be switched.

“Our big thing is that we’re not trying to do a typical magic show. Every magician says that, but a typical show is that I come on stage, [Stacy] is my assistant, and I cut her in half, and so on,” he said. “This speech that we’re going to do is about changing the roles. I’m the assistant and she’s the magician.”

“We’re going to base the entire performance on magic. We plan on opening with a quick-change act, which is exactly how it sounds. We’re going to open the show with that to get people’s attention, to show them what we do … something very quick and flashy,” he said. “Then I’m going to perform a trick, and then we plan on reversing the roles, and [Stacy] is going to do the trick her way just to see what the difference is, and if it really makes a difference when the female does it.”

Stacy Alan, a former supervisor at Child Guidance and Family Solutions — a non-profit mental health facility in Akron, Ohio — was introduced to the world of magic in 2010 when she got engaged to Jason Alan during one of his performances on a cruise ship.

“The magic community is such an interesting, close-knit community that most people don’t really know about. I mean, a lot of people, if you say ‘magic,’ they know the name Houdini, they know the names David Blaine, David Copperfield, Criss Angel … those are very common, but that is just the surface. There is so much more that goes into it,” she said. “It’s really interesting to see the creative process that people go through to make magic happen.”

Jason Alan and his wife travel all over the world performing in places like the Bahamas, Denver, Aspen, Colorado and Utah. They have two dogs, but no children. Jason Alan said that he had many influences at the university like Nicole Mullins and Frank Bosso, professors of exercise science, but no one has inspired him more during his career than his mentor Steve Daly — a professional hypnotist, entertainer and female impersonator.

“My mentor goes by Steve Daly. He’s out of Vegas. Years ago, I won a bunch of competitions, and I thought I was very good at what I did. He invited me out to Vegas to mentor with him, and immediately he knocked me down and straightened me out. He taught me about show business,” Jason Alan said. “He is one of the best entertainers I’ve ever seen in my life, and both of us owe a lot to him. He’s like family to us.”

Jason Alan explained that he enjoys the audience reaction more than the actual trick and said he thinks that tricks are just puzzles for people to solve.

“The best feeling is when we create something from scratch and we go and perform it, and you just see the reactions. My goal is not to trick people; it’s to make an experience of what it is. If I’m tricking you, I’m showing you a puzzle. A puzzle can be solved. If we do something that’s crazy then it doesn’t make sense, and it can’t be solved,” he said. “I used to do this at YSU. I’d walk up to a homeless person and I would show them that my hands were empty and I would rub my hands together and a hundred dollar bill would appear, and I would hand it to him and walk away. That’s the type of reaction. There’s no explanation. It’s really the reactions and turning puzzles into miracles that I enjoy.”

Stacy Alan and her husband expressed excitement for the event.

“I think it will be exciting. We were really happy that they contacted us, and we listened to a few different things,” she said. “We’ve had some friends who had done TED Talks, and it is just a really great program so to be a part of that is really cool for us. We’re really excited about it.”