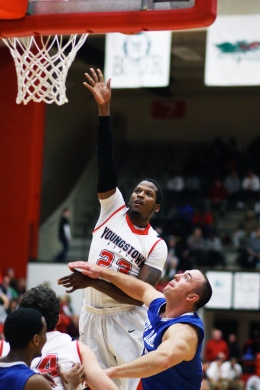 “I thought we did a really good job in the first [half],” head coach Jerry Slocum said. “But I think we got kind of trapped for settling with threes, and I think we are capable of doing that. In the second half it dried up.”

The Penguins made their first seven three-point filed goal attempts to open the game helping them finish 12 of 18 from behind the arc.

Ward finished second in points to sophomore guard Kendrick Perry, who led the Penguins with 18. Allen and junior forward Damian Eargle also finished in double digits with 14 and 12 points.

Falcons’ senior forward Eric Dummermuth led all scorers in the game with 20 points. Slocum was impressed with his play.

“They’ve got two very good players in [Dummermuth and freshman Marcquice Taylor],” Slocum said. “In the first half, I thought we did a good job stopping them but fell off in the second.”

Ward said he knows there is more work to be done.

“It definitely feels good, but we know we have a lot of work to do,” Ward said. “Once we get to league play, it’s a battle every night. We are just learning and growing each game.”

In the second half, the Penguins went cold from beyond the three-point line, shooting two of 11. They attributed it to the Falsons’ zone defense.

“We were hot in the first half [and] kind of fell in love with the three,” Ward said. “I think we did the same thing in the second half, and those same shots weren’t falling.”

Slocum said he was most concerned with the missed shots, which led to poor defense following the shot.

“That’s team defense,” Ward said. “We have to work on that collectively. I know we are going to get worked in practice tomorrow because we didn’t play great defensively. We are learning and growing each day.”

The bench is another area of Slocum is concerned with.

“Those guys have got to play, and they got to be able to help us,” Slocum said. “We will take every opportunity, especially early in the games, develop those guys and try to get them in. As the game goes on, we will go with guys with a little more experience.”

With the season still in its infancy, Slocum said the team is still figuring itself out.

“This team has to learn to play at home,” Slocum said. “There are a lot more distractions playing at home. We went down at Samford [University], and we were so focused and executed for 40 minutes.”

The team will not have much time to figure it out after Friday’s home opener. They will spend six of their next eight games on the road.

“At this time of the year, there are so many things that you have to do better,” Slocum said. “We know what is coming. We have to speed this process up. We will be after it tomorrow growing and working at it.”

The Penguins play on Friday at the Beeghly Center against the University of California Riverside.