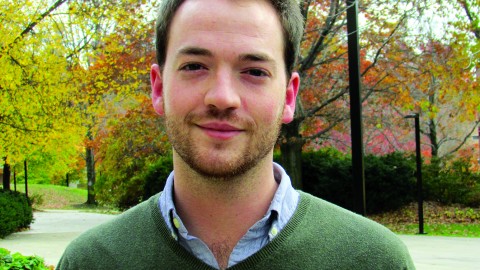 Mike McGiffin, operations manager of Kilcawley Student Center at Youngstown State University, has been appointed as the downtown events coordinator for the city of Youngstown.

“I’m excited. It’s a great time in Youngstown right now. There’s a lot of things that are happening downtown,” McGiffin said. “I’m really excited to be in that position.”

John A. McNally IV, mayor of the city of Youngstown, said he’s excited to work with McGiffin. He thinks his experience managing events at YSU will be helpful. He’s also optimistic about the potential to get YSU students involved downtown.

“Bringing Mr. McGiffin in to lead the city’s downtown event development efforts will further strengthen the city’s relationship with the YSU community,” McNally said in a press release.

McGiffin felt this played a role in his appointment.

“I think that’s kind of why they hired me: to bridge that gap between the university and the city of Youngstown,” McGiffin said.

McGiffin has worked at Kilcawley Center for five years managing events while also functioning as an adviser for Penguin Productions.

“[Working at YSU gave] me the opportunity to plan, execute and debrief events on literally every scale. In Kilcawley we’ve had everything from luncheons and banquets to presidential visits to concerts and with Penguin Productions obviously we do the live music thing,” McGifffin said. “The diversity of the events has really prepared me to takeover the events for the city of Youngstown.”

“I’m excited to see what [McGiffin] can do,” Gillam said.

The position as events director will draw on his experiences, but also take him in new directions.

“Every event that happens downtown, and then some other events that happen in the other wards of the city, I’ll oversee those events from start to finish which aligns perfectly with what I do in Kilcawley and also with Penguin Productions,” McGiffin said. “However, one of my responsibilities with the city is going to be to promote all things good [in] Youngstown. So with that in mind, I’m kind of charged with being one of, if not the, biggest cheerleader for Youngstown.”

This will include promoting new businesses and restaurants that appear downtown.

“It’s sort of my responsibility or obligation to do whatever I can to help them succeed,” McGiffin said. “It’s something that is going to be new for me from a professional standpoint, but on a personal level, I’ve always been an advocate for Youngstown, and I’ve been vocal about that, so I think it’s going to be a lot of fun.”

McGiffin said he is not sure whether or not Kilcawley will replace him, but he is confident they will be successful going forward.

“Kilcawley has a tremendous staff already in place. They will be shorthanded, but the talent that is already working in Kilcawley is more than capable of handling the responsibilities that I’ve had, so I think moving forward they’re going to be just fine,” McGiffin said.

McGiffin is replacing Lyndsey Hughes, who resigned as events director on May 21 after receiving a settlement in response to a sexual harassment complaint filed by Hughes against DeMaine Kitchen — who served as chief of staff to former Mayor Chuck Sammarone.

McGiffin will begin working for the city on Nov. 17.