Youngstown State University staff, students and the Youngstown community marched and rallied to bring awareness to domestic violence and sexual assault on April 13, starting next to Kilcawley Center.

The march began at the YSU rock, which was painted in honor of the occasion. The group marched around campus chanting phrases such as, “Yes means yes, no means no, whatever we wear, wherever we go.” 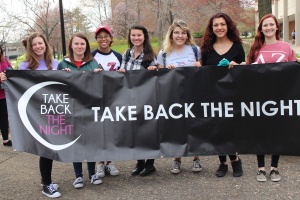 Ann Jaronski, the director of counseling at YSU, said it was her second year attending this type of event here on campus, but has organized them in other locations in the past.

“It’s a fabulous opportunity to bring awareness to sexual violence and a good way to get the community involved,” Jaronski said.

During the rally, participants were invited to speak to the crowd and share their thoughts and experiences. YSU student Kenna Rearick read a poem in honor of a young woman who is a sexual assault survivor.

“I’m really dedicated to bringing more activism about issues of assault and women’s issues on campus,” she said.

Powell said 40 percent of rapes occur before the age of 18, and that one out of five women are victims of sexual assault. She also stated that victims are four times more likely to be raped on a college campus due to alcohol use.

“As a director, as an advocate, as a person who actually goes out and sees these cases of sexual assault right when they happen, it really plays a part to you,” Powell said. “It’s not just a job. It’s something that we have to all take a stance on.”

Casey said the largest number of women experience violence in their own home at the hands of someone they know. She also pointed out that sexual and domestic violence affects men and women.