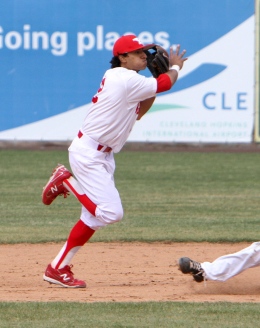 To say the Youngstown State University baseball team’s southern road trip in recent years has been rough would be generous.

“When you’re starting out against Georgia Tech the one year, then Georgia who just came off playing in the [College] World Series, it’s tough,” said head baseball coach Rich Pasquale.

The matchups against Atlantic Coast Conference and Southeastern Conference elite teams are challenging. Equally challenging is preparing for those teams while dealing with the winter weather in Youngstown. Often, the southern road trip is the first time that the Penguins practice and play outside.

“You don’t want to make excuses, but it’s just the first time we’re outside,” Pasquale said. “Our hitters are hitting in the cages. We’re not out on the field right away.”

The southern teams, though, intrasquading outside.

“Southern teams have an advantage to a certain extent,” said Wright State University baseball coach Rob Cooper, whose 2011 team started 2-6 and went on to win the Horizon League championship.

“They don’t give them a three-run lead because they practice outside, and we’re inside, though,” Pasquale said. “At the end of the day, pitchers have to pitch well and hitters have to be prepared to hit.”

With access to the Watson and Tressel Training Site this year, Pasquale said his team is better prepared than in years past.

“I think the WATTS is definitely going to help us improve early on,” he said. “With the way we can set up practice, we’re able to do more. Our guys feel right in stride, and they feel fresh.”

The WATTS provides enough room to simulate the lengths and distances of a baseball field. Pasquale said this element is what makes the facility valuable.

“Before, we had to cut things down until we got outside,” Pasquale said. “Now we have a full regulation infield, full 90-foot bases. … Outfielders are able to throw the distances that they need. Pitchers are able to long-toss. We were limited in what our pitchers were able to do to build up their arm strength and stay on track during this time. So, right there, it’s tremendous.”

Along with the WATTS, when the Penguins open the 2012 season, another factor points toward success. They will play three of their first four games in Cary, N.C., against Canisius College, Monmouth University and Bryant University, which are all northern teams.

“This upcoming week should be a little different because three of the four teams we’re playing are in a situation similar to ours,” Pasquale said. “Northern teams were tired of going down south and getting blasted by [southern teams].”

The Penguins will not avoid southern teams, though. YSU will travel to North Carolina State University (35-27 in 2011) on Saturday.

“I know Coach Pasquale very well and have a lot of respect for him,” he said. “I’m looking forward to the game, and it should be a good early-season test. … I expect the Youngstown State team to reflect coach Pasquale’s tough attitude.”

Avent added that he’s expecting to see a consistent lineup. Throughout the first 15 road games, Pasquale wants to develop one lineup and make sure those guys get plenty of repetitions.

“We’re going to stay with one lineup that we think gives us the best chance to win,” he said. “One thing that happens is you tend to play a lot of guys, and position players don’t get in a good groove. We’re staying with it to give guys enough at bats.”

While Pasquale expects this approach to improve performance, he said the key to ending the losing trend is quite simple:

“We really just have to go play good baseball.”