After Parvati Shallow graduated from college, she wasn’t sure where to go next. Then, CBS producers asked her if she would like to compete in the reality TV show, “Survivor”, in 2006.

“Saying yes to that blew doors wide open for me,” Shallow said. “It got me thinking more like, ‘Wow, if I can do this, what else can I do?’”

Although Shallow didn’t win that season, she was invited back as a fan favorite to compete in “Survivor: Micronesia” with other past contestants and won the top prize. She also competed for a third season and hosted CBS’s third season of “Around the World for Free.”

Shallow spoke to Youngstown State University students on April 11 about how to overcome fear and uncertainty. She said people must take a step towards their own happiness instead of doing what others expect them to do. 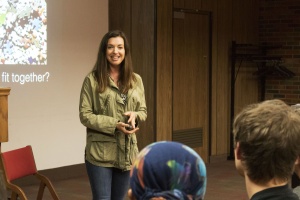 “We can have this [end] goal in mind, but do we know how each piece is going to fit together before we actually fit each piece together?” Shallow said. “Not necessarily.”

Hosting a travel show was a dream of Shallow’s, but she took a public relations job after she graduated college instead. She quit after three months and started applying for reality TV show competitions.

Shallow, who is also a former boxing competitor, auditioned for the reality TV show “The Amazing Race” and wasn’t selected, but the producers wanted her to compete in “Survivor.” She said people need to understand their goals and limits before they pursue their goals.

“Every one of us has a different threshold for what we can withstand as far as stress goes,” she said. “When you see people on “Survivor,” some people break down and cry and really lose it, and some people [are] fine. It’s pouring down rain and they can handle it … Everyone is different.”

YSUrvivor invited Shallow to YSU to give the lecture through CAMPUSPEAK, an organization that brings speakers to campuses.

Sarah Davis, president and founder of YSUrvivor, said she was pleased with the turn out.

“I think it was a lot more useful than people expected it to be,” Davis said. “They may have needed something like this without realizing it.”

Andrew Zack, a senior YSUrvivor participant who attended the lecture, said Shallow had big shoes to fill and delivered well.

“The fact that she was a winner and a good player for multiple seasons is definitely some icing on top of the cake,” Zack said.  “She definitely felt very authentic there in front of the stage and that’s really nice.”

YSUrvivor is a student organization inspired by the show, forming tribes and competing in challenges every semester to determine a winner. Shallow said she was invited to partake in a puzzle challenge before the lecture, which impressed her.

“I have been to other colleges where people say that they are “Survivor” fans and they love the show, but I’ve never seen anything so well-executed as this “Survivor” club,” Shallow said. “[Davis] put together all of these puzzle pieces; she definitely put a lot of work into it, so it was very well thought out and everyone’s super into it.”