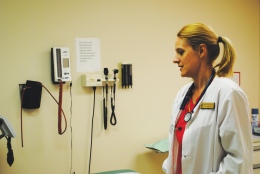 Wendy Thomas, a registered nurse in the Student Health Clinic, provides a glimpse into one of the three examination rooms in the clinic. Thomas, who was hired by the university in March, immediately began informing herself about YSU’s health care options for students. Photo by Jordan D. Uhl/The Jambar.

Youngstown State University students without health insurance will have to wait until June to hear the fate of the Patient Protection and Affordable Care Act, and possibly just as long to hear about a new health insurance plan offered by the university, which was expected Sunday.

Gail Reed, a representative with UHC’s student resources, said the delay was caused by the U.S. Supreme Court’s oral arguments on the PPACA. She said they needed extra time to ensure that the plan would meet federal guidelines.

“They should be ready to go, but they’re not,” said Matt Novotny, executive director of student services at Kilcawley Center. “They probably shouldn’t have put that date out.”

After contacting UHC, Novotny still was left in the dark. No specific date was provided by UHC as to when he could expect the plan’s specifics to arrive.

The current plan wasn’t available until June, Novotny said. Another delay isn’t a major hindrance, as many students don’t enroll until mid-summer, he added.

Preliminary details were provided on the flier, which indicated a low deductible and the removal of a maximum on the prescription drug benefit, which was previously $700.

Wendy Thomas and Judy Pavalko, registered nurses at the YSU Student Health Clinic, advocated for the eradication of the cap on prescription drug benefits.

Pavalko said this would help decrease the cost of medical supplies for students suffering from conditions requiring frequent prescription renewals, such as diabetes.

Novotny said YSU worked with other state universities within the Inter-University Council of Ohio to increase buying power with UHC. Those universities were also left without plan details.

Roughly 65 students are enrolled in the current plan, which may seem like a wasted effort with such sparse participation, but Novotny said the plan costs the university nothing to offer.

He said he hopes more students will enroll in the coming years.

Freshmen Taylor Maiese and Stephanie Beck were unaware YSU even offered health insurance plans through UHC. While they’re both covered under their parents’ plans, they agreed it’s a good idea.

Marco DiTommaso, also a freshman, knew of the plan but wasn’t familiar with any specifics. He, too, is insured under his parents, but said it was a great option for students who couldn’t get health insurance on their own merit.

Interested students can register until Sept. 15, but the yearlong plan won’t take effect until Aug. 17.