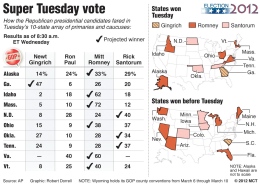 The results of Ohio’s primary were finalized Wednesday after hours of uncertainty during Super Tuesday.

Newt Gingrich, whose only victory on Tuesday was in his home state of Georgia, earned nearly 15 percent of the Ohio vote, and Texas Rep. Ron Paul earned a little more than 9 percent.

“I was not really surprised at the results,” said Paul Sracic, chairman of the political science department at Youngstown State University. “I expected Romney to win narrowly.”

The night was undoubtedly long for Romney and Santorum, who watched their respective performances rise and fall well into the evening. Major media outlets were hesitant to call Ohio, with a consensus reached at roughly 12:30 a.m. Wednesday.

“Mitt squeaks by in Ohio behind a blizzard of negative ads, once again persuading a bare plurality that he is not as bad as the other guy,” David Axelrod, communications director for the president’s re-election campaign, tweeted Wednesday morning.

Along with Ohio’s 66 delegates, Romney tallied Super Tuesday wins in Vermont, Virginia, Alaska, Idaho and his home state of Massachusetts.

“Romney will remain the front-runner, although Santorum is showing that he can take this to the convention,” Sracic said.

Needing 1,144 delegates to seize the nomination, Romney stands at 415.

Santorum’s recent surge has bumped his total to 176. Gingrich has earned 105, and Paul ranks last with 47. Possibilities for one of the bottom three to gain the nomination are a long shot, but all three refuse to forfeit.

“Gingrich won’t drop out, but Santorum’s win in Tennessee begins to neutralize Gingrich’s argument that he is the only candidate who can win in the South,” Sracic said, adding that he expects Romney to gain the nomination, but said it will be a “damaging struggle.”