As summer break approaches, construction projects both old and new are scheduled to be completed before students and faculty at Youngstown State University return for the fall semester. 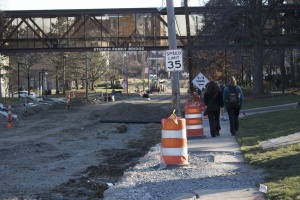 Lincoln Avenue became vehicle-accessible in December, a project Hyden said is expected to be finished soon with the warm weather approaching.

“What’s remaining to be done on Lincoln Avenue is just the landscaping,” Hyden said. “Trees and planting in those beds, primarily along the north side of the road.”

Hyden said construction on Wick Avenue is much further from completion, estimated to be operational in August.

“They’ve taken that thing down to the depths,” Hyden said. “All storm sewers, sanitary sewers water lines, gas lines and all of the overhead utilities are going to go down in duct banks underground, so that’s going to be a real transformation.”

Wick Avenue is going to be redesigned with three lanes, Hyden said.

“That’s going to be a major change in the traffic patterns,” Hyden said. “That road was never wide enough for four lanes. It was tight … and we’ll have to see how that works out.”

Ron Cole, YSU public information officer, said they have been pleased with the patience of YSU attendees during these projects.

“Things have gone fairly smooth considering the work and the detours that are in place,” Cole said. “Everyone seems to be doing their best job in following those detours the best ways possible and we have heard relatively few complaints.”

Also underway is phase two of the University Edge apartments on Fifth Avenue, which are on track to be ready for move-in day in August.

Major behind-the-scenes enhancements to campus facilities are planned to be completed within the upcoming months. Richard White, director of Capital Planning and Construction, said this includes innovations to Meshel Hall and Ward Beecher, roofing to Jones Hall and a staircase leading past Bliss Hall to the student apartments.

“It’s just a hill now where a lot of [students] walk down the hill. Now you’ll have a set of steps to walk down,” White said. “We want to make it a little safer. It will be well-lit, and hopefully … we’ll have a deicing system so you only have to shovel it.”

A full list of summer projects to campus can be found on the board of trustees’ website.

The city plans to do construction of Fifth Avenue as well, but Hyden said no definite schedule has been made yet.