Every year, students come to Youngstown State University to walk, run, have fun and help raise money to fight cancer as part of Relay for Life. This year’s event was held on Friday in Beeghly Center.

According to the organization’s website, more than 4 million people in more than 20 countries participate in Relay for Life each year. 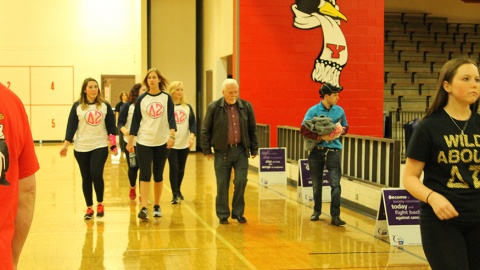 Several students and community members participated in YSU’s event because they had a personal connection to cancer. Emily Huggins, a member of YSU’s Delta Zeta sorority, said anything people can do to help benefits people suffering from cancer.

“This is the first year that I have come to the [relay] at YSU,” Huggins said. “Family friends of ours died last year of cancer, and I felt like it was important to support their families this year at this event.”

“We sit around here at Relay for Life telling stories,” Lorraine Wardle, a community member, said. “A friend of mine in Illinois has cancer and is going through chemotherapy.”

Wardle was there with a team called the Pantene Power Princesses. Pantene sent a packet to her daughter’s Girl Scout troop with products to give to women during chemotherapy. The troop also sent letters to Wardle’s friend in Illinois.

“We made a team, and family and groups came together,” Wardle said. “We did this in honor of her.”

Jena Bushong, a member of the Honors College, said she has been coming to YSU’s event for four years, but this was the first time she had a reason to be there.

“People in my congregation at church have become affected by cancer and lost some of their family members to cancer,” Bushong said. “To know people who have suffered and are still suffering makes this all very real and very important. I wanted to support all these people in my life and raise awareness.”

Christina Yovick, a graduate student, oversees leadership programs on campus. She said the Emerging Leaders program requires 40 hours of community service, and she encourages students to participate in the event. A friend of hers had a severe form of bone cancer when she was younger requiring surgeries and amputations. Yovick said it was difficult to watch her struggle through that.

“It really gives you perspective,” she said. “She is now one of the strongest people I know, and she is happy. Which is why I come here … in memory of her.”

Crawford Warrick, a student at the university, said he was there to support a friend of his who had cancer when he was eight. He wasn’t planning on sticking around for the whole event.

“Sadly there is just not that much to do here to keep me involved,” Warrick said. “The event for the past few years has not encouraged everyone to stay and hang around as a community.”

The event was scheduled to run until noon on Saturday, but by 9:30 a.m., everyone had packed up and left.

Tim Bortner, president of YSUnity, said he’s been coming to the event since 2009 to support the cause. He said a friend of his died of cancer, and it’s important to keep things like Relay for Life going.

“If we don’t continue coming and supporting, then it will just disappear,” Bortner said. “We cannot let this kind of event just disappear.”