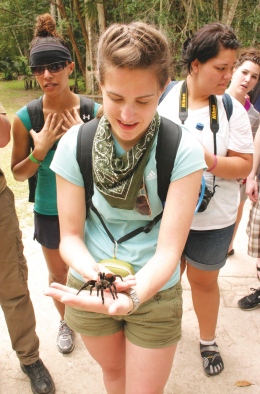 Matt O’Mansky, an assistant professor of sociology and anthropology, and 15 Youngstown State University students spent their spring break roasting marshmallows over a volcano in Guatemala.

While O’Mansky often travels abroad, he said he extended the invitation to see the ancient Mayan civilization firsthand on a nine-day trip.

“It’s one thing to hear about the Maya, to see the pictures and videos, but it’s something entirely different to actually be there in these cities,” O’Mansky said. “So I wanted to give people the opportunity to go to Guatemala and get class credit for it.”

Even though the trip was planned in the fall, O’Mansky said the hardest part was recruiting members and lowering the cost of the trip. College of Liberal Arts and Social Sciences majors paid $1,325, while all others paid $1,825.

Senior Sara Weigel said that when the group first arrived in Guatemala City, the surroundings looked a lot like home — traffic jams and businesses, as well as a McDonald’s, a Burger King and a Pizza Hut.

Weigel said that the deeper they went into the city, the more impoverished it became.

“The houses seemed like what we would consider to be shacks. Any one of us was considered rich by their standards,” she said. “It made me appreciate the opportunity that much more.”

Junior Erika Hricik said she woke up at 5 a.m. every day to go for a hike.

“We were drenched in sweat, but it was acceptable because everybody was sweating and gross,” she said. “We got a great workout, and we were jungle-dirty.”

“We had to hurry up back to the buses to avoid a funeral procession, and our bus driver, Pedro, got stuck behind a traffic accident,” Morris said. “In order to get up a hill, Pedro told us we had to hop out of the bus and run alongside the bus so that he could make it up the hill while semi-trucks were passing us.”

Weigel said that zip lining over Lake Atitlan, while surrounded by volcanoes, was her favorite memory.

Many of the students who traveled to Guatemala gained friendships through the experience. Although the trip didn’t involve excavating, O’Mansky said his students received hands-on learning.

“It was real life and not just in pictures,” he said.

O’Mansky added that the trip opened all of their eyes to impoverished cities. He said the entire group was asked for money along the tour.

“These people have to decide whether or not to get food or medicine this month,” he said. “I know we all have financial problems, but we are rich to them.”

Hricik said the culture shock was important in order for her to understand how other people live.

O’Mansky travels to Guatemala most summers to perform field work; he is planning another trip during summer 2013, which could possibly be for two and a half weeks.

He said he encourages students to take as many study abroad opportunities as possible.

Weigel traveled to the Bahamas twice with O’Mansky, where they did archaeological excavating. However, she said she enjoyed Guatemala because she was given ample time to explore different cities.

“One of my favorite days was when we went to the Mayan center of Tikal. As [O’Mansky] said, Tikal is the Disney World of Mayan ruins,” Weigel said. “It’s impossible to describe the grandeur, and I’ve never seen anything like it in my life.”