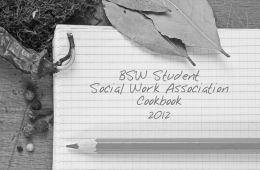 The Student Social Work Association at Youngstown State University is compiling a cookbook with personal recipes from students, faculty and friends to sell on Social Work Day.

Senior Krista Brawley, president of the SSWA, has been busy working on the cookbook since last year.

“The idea was to get students and faculty involved with the fundraising,” Brawley said.

This is the first year the SSWA has decided to pursue a cookbook, which will be sold for $10 on Social Work Day in Kilcawley Center’s Chestnut Room on March 23. Around 100 books will be printed.

Brawley and Brittany Yeager, the SSWA’s secretary, have been working closely.

“We had recipes coming in for months,” Yeager said. “We had a December cutoff, but recipes were coming in well into January.”

The paperback cookbook consists of nearly 150 recipes,  including entrees, side dishes, desserts and drinks.

“I wanted it to be social-work themed,” Brawley said. “There are a lot of cultural recipes and family recipes.”

Brawley said they accepted any recipe, but encouraged anything out of the box. They received recipes from Liberian, German and Hungarian cultures, which are included in the book.

“I am really proud of this project,” Brawley said. “I was happy we were able to keep the price down. … Hopefully, more students will be able to afford it this way.”

Brawley formatted the book, and Yeager typed the recipes, some of which were handwritten.

Yeager said deciphering the handwritten recipes, particularly the abbreviations, was a challenge.

Brawley and Yeager were surprised at the outcome.

“We got a lot of recipes from other departments,” Yeager said.

Yeager said Brawley was determined to get people involved.

“I made everyone in my family donate at least one recipe,” Brawley said. “We also reached out through public announcements, and I brought it up in my classes.”

“I enjoyed working with Krista on this,” Yeager said. “This also made my experience here better by connecting with students and faculty.”

During the SSWA’s next meeting, members will decide which organization will receive the funds, Brawley said.

Brawley and Yeager both said they are hoping to see a nice turnout on Social Work Day, where T-shirts will be available.

Victoria Marion, president of the National Association of Social Workers, is speaking at the event.

Keller said the group has had a lot of success raising money for various community charities this past year.

“I’ve been doing this for 15 years, and it’s a joy mentoring the future leaders of social work,” Keller said.