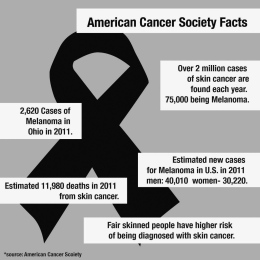 Adam Heavner has run rides at Cedar Point for the past four summers. He works, on average, 10 hours each day and deals with the sun and its effects on his skin.

“It’s really easy to forget to put sunscreen on because of the stress of the job,” said Heavner, a senior at Youngstown State University.

According to the Skin Cancer Foundation, the risk of skin cancer increases when skin is unprotected and is overexposed to ultraviolet radiation from the sun or tanning beds.

Heavner said he is exposed to an abundant amount of sunlight nearly every day at Cedar Point.

During his summer training at Cedar Point, Heavner is told to wear sunscreen — and he must sign off that he was told about doing so.

Heavner said he doesn’t discuss skin cancer with his doctor, but he is aware of what to look for.

The Skin Cancer Foundation also reports that it is important for people to be aware of moles on their bodies.

“They say that if the moles aren’t a perfect circle or are discolored, to get them checked,” Heavner said.

His grandmother had skin cancer, and Heavner said he often asks himself how she acquired it.

According to the American Cancer Society, nearly half of all cancers in the U.S. are skin cancer, and more than 2 million cases are reported each year.

The Melanoma Center website explains that melanoma is one form of skin cancer, and also that it is the most dangerous.

The ACS defines melanoma as “a cancer that begins in the melanocytes — the cells that produce the skin coloring or pigment known as melanin … [which] helps protect the deeper layers of the skin from the harmful effects of the sun.”

Melanoma is responsible for nearly 75 percent of skin cancer deaths each year, according to the ACS.

The Skin Cancer Foundation cautions that those with pale complexions should be especially careful.

Sophomore Taylor Swan said she burns easily, and it’s rare for her to tan after being exposed to the sun.

“I know about the different types of skin cancer because they were mentioned in science classes throughout my schooling, but they never went in depth about it,” she said.