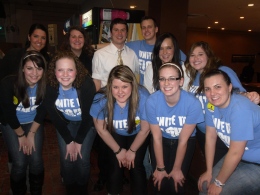 Members of Up ‘til Dawn gather after last year’s letter writing event in Kilcawley Center. Photo courtesy of Katie Petrosky.

When Wendy Avery, mother of three from Canfield, was leaving St. Jude Children’s Research Hospital in Memphis, Tenn., in 2005, her youngest son, Nick Avery, looked up at her and said, “Mom, I don’t ever want to have cancer, but if I do, I want to come here.”

Six months later, he was diagnosed with leukemia.

The family was invited to visit and tour the hospital in 2005 because of Wendy Avery’s philanthropy. St. Jude paid for their two-day hotel stay.

“We were really amazed and super impressed with the services that they provide for the children and their families,” Wendy Avery said. “It really felt like God had sent us there for a reason.”

Nick Avery was 14 years old when he was admitted to St. Jude.

Wendy Avery and her son moved to Memphis and lived there while he was treated.

Their family doctor was concerned about the move, and cautioned them that their support system would still be in Ohio if they chose to move to Tennessee.

But Wendy Avery decided it had to be done.

St. Jude provided them with a two-bedroom apartment during their time in Tennessee and allotted them $100 for groceries every week. A tutor was also provided so Nick Avery would not fall behind in school. After six months of treatments, he was released from the hospital.

Two months later, Nick Avery’s cancer relapsed, so he returned to Tennessee with his mother for a bone marrow transplant.

He was there for only a few days when he suffered a subdural hematoma, bleeding between the brain and the skull due to the blood’s inability to clot properly due to cancer, and he was rushed into emergency surgery. He went into a coma and passed away.

According to the National Cancer Institute, cancer is the leading cause of death among children from infancy to age 15. Leukemia, brain cancer and other central nervous system cancers account for nearly half of the cases.

Locally, 10 YSU students who constitute the organization Up ‘til Dawn are making it their mission to help families like the Averys.

The group began in 2008 as an overnight event for YSU students. Volunteers wrote letters to potential donors until the next morning.

The group’s core letter-writing event will be Thursday at The Hub in Kilcawley Center. Members said they are hoping to make this event their most successful one yet.

“It costs approximately $1.7 million a day to run St. Jude Children’s Hospital, so fundraising and participation are key. We rely on organizations such as Up ‘til Dawn to continue helping the children and their families,” Studniarz said.

Caren Gaskins, co-recruitment chairwoman of Up ‘til Dawn, said it is important to raise money because the foundation is nonprofit and runs on donations.

“No one is ever denied treatment because of the family’s inability to pay,” she said.

Wendy Avery has been on St. Jude’s family advisory council for the past four years. She specializes in working with families that have lost a child and with families that are about to receive bad news when a child’s cancer is no longer responding to treatment.

“When you donate, you aren’t just raising money for their hospital, you are helping children everywhere with cancer survive,” Wendy Avery said.

Nick Avery would have been 21 years old this year, and Wendy Avery said she appreciates the hard work and dedication from groups like Up ‘til Dawn.

“[Nick Avery] might have actually been in some of your classes that you’re taking right now,” Wendy Avery said. “I want to encourage students to continue raising funds, because what you’re doing, it is so important.”