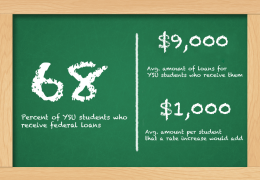 Errin Donahue said she had a panic attack at her exit counseling session prior to graduation. She was overwhelmed with about $30,000 in student loan debt.

“I don’t want to spend years paying it back, and it’s going to be hard to find a job that will pay off five years of maximum unsubsidized and subsidized loans,” she said.

The College Cost Reduction and Access Act of 2007 lowered the interest rate on subsidized student loans to 3.4 percent. The rates are set to double on Sunday.

In 2011, about 9,000 Youngstown State University students, or roughly 68 percent, received more than $82 million in federal loans.

For new loans, the increase would mean an average of $1,000 per student in additional debt over the lifetime of the loan. On Tuesday night, Senate leaders announced a tentative compromise.

U.S. Sen. Sherrod Brown renewed his call to Congress on Wednesday to pass the bill preventing the interest rate increase.

“With college costs on the rise, allowing the interest rates on federal student loans to double would be salt in the wound for these students who are already likely to graduate with thousands of dollars in loan debt,” Brown said in a press release.

House Majority Leader John Boehner showed support for the Senate’s proposal on Wednesday, but the measure still needs to be finalized.

Bill Johnson, a Republican from Marietta, had already expressed support for student-centered efforts.

“The last thing we want to see is the rates increase,” Johnson said.

“One way to generate revenue elsewhere is to create more taxpayers rather than higher taxes.”

Elaine Ruse, director of the YSU Office of Financial Aid and Scholarships, said it’s a step in the wrong direction.

Despite a potential increase, Ruse doesn’t expect the number of students relying on loans to decrease.

“It hurts our students, but we’re going to process the loans students request regardless of the interest rate because students want and need them,” Ruse said.

Editor’s Note: At the time of publication, Congress was still working to finalize the agreement, but a decision was expected at any time.