President Donald Trump was sworn into office on Friday, sparking a wide range of reactions after the transition from an eight-year Barack Obama administration.

Students at Youngstown State University expressed their opinions on the new administration. Laurencia Canzonetta, co-chair of YSU Students for Trump, said she was filled with patriotism during the inauguration and looks forward to the future. 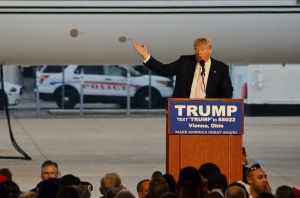 “I’m very excited to see President Trump in action,” Canzonetta said. “With the help of Congress and the American people, I have full faith that he and his team will lead our country in the right direction.”

Canzonetta said she looks forward to the Trump administration’s changes to border security, military support and a new healthcare plan, most of which were mentioned by Trump during his inauguration speech.

Brooke Lazar, a professional and technical writing student, said the change will help the people’s voice be heard.

“I don’t believe our government cares about what we have to say,” Lazar said, “but I think Trump is going to change that. He is actually for the people, and he doesn’t sugar coat things.”

While some students are thrilled about the executive transition, others hold concerns for Trump’s presidency. Dylan Edwards, the president of YSU College Democrats, said one of his greatest concerns are changes to healthcare.

“I’m a person with a pre-existing condition, so I think it is worrying that they are actively in the process of repealing Obamacare without a backup plan for health insurance in place,” Edwards said.

As one of his first acts as president, Trump signed an executive order Friday to scale back the Affordable Care Act. Edwards said repealing the ACA will have a negative impact after four years.

“You could have 100 million people in this country booted off of their insurance because they fall into the category of pre-existing conditions,” Edwards said. “Their rates go so high for insurance, they cannot afford it.”

Canzonetta said a replacement to ACA is necessary because the act is not affordable for the U.S.

“Some families have a $10,000 [deductible] and the premiums have increased 25 percent across the nation,” Canzonetta said. “Under President Trump’s administration, I believe we will get the real problems addressed and create a competitive environment to keep the rates in line.”

Another concern of Edwards’ is Trump’s plan to fill Justice Antonin Scalia’s seat in the Supreme Court because he fears Trump’s judgement.

“We’re dealing with a man who is famous for his 3 a.m. tweets that inflame the senses of the majority of the nation,” Edwards said. “Someone with that impulsiveness at the helm of the U.S. for even these first 100 days … is concerning.”

“As a woman, I am a little scared of what he will do to women’s reproductive healthcare rights,” she said. “When you have someone in a position of power that talks about sexual assault and has sexually harassed women, that doesn’t make me feel any better.”

“He was definitely someone who was able to get certain policies that he wanted to get passed passed,” Colettis said. “With a lot of the problems that were happening, he was a good soother for the country.”

Although Lazar is looking forward to the Trump administration, she said she was sad to see Obama leave.

“I think he genuinely loved what he did,” Lazar said. “While it’s sad to see such a good-hearted man leave, it’s time for us to prepare for better things.”

Frost said she hopes that the divide left by the election can be mended, even if only slightly.

“[Trump] has really made everyone question what the Republican and Democratic Parties stand for,” Frost said. “Because those questions are being asked, it may help us to mend that divide.”