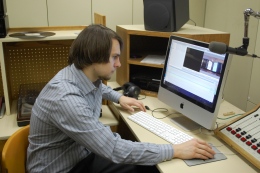 Brad Kolasinski, vice president of the Youngstown State Film Group, works on a project in the audio lab. Photo by Chad Travers/The Jambar.

The Youngstown State Film Group unites students who are passionate about filmmaking. The group is comprised mostly of telecommunication studies majors, but is open to anyone interested in the hands-on aspects of film production.

“I got to know Barry from classes. One day, I was working on a project, and Barry came in and asked me if I thought there would be any interest in a film group on campus. I told him I definitely would be, and I knew several other people in the [telecommunication studies] department would be, as well,” Kolasinski said.

Members share a love of film, an interest in the creative process and the mechanics of producing movies — from scriptwriting and storyboards to shooting and editing.

“The [telecommunication studies] department doesn’t offer an area of study in film, but I’ve always wanted to start a group that really focused on the filmmaking process,” Cunningham said.

The group, which officially formed midway through the spring semester, is in its infancy with only 10 members, but members hope to recruit more next semester.

“We’re always looking for talented people who want to contribute to the production of films. We’ll be holding a few meet and greets early next fall,” Cunningham said.

Cunningham said he plans to advertise the group on campus and organize several informal meetings for students who are interested in joining.

Members meet on Wednesdays in Bliss Hall to work on their current project, a short film with the working title “Hostage.” The film is still in the scripting stages, so the details are not yet finalized. The plot revolves around a young girl who is kidnapped. Her wealthy father responds to the tragedy.

After scripting, the group will start scouting for shooting locations and searching for on-screen talent.

Cunningham said the group intends to have its first short film completed by next semester so it can be entered into local film festivals in the fall.

Amy Crawford, an assistant professor of communication at Youngstown State University, serves as the group’s faculty adviser. She said she has big plans for the group’s future, including guest speakers.

“Even though I only serve an administrative role, I’m very interested in film production. Barry asked me to step in as the group’s adviser to provide some structure,” Crawford said.