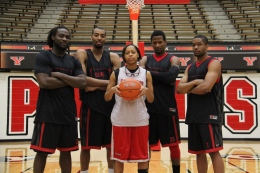 Men’s basketball coach Jerry Slocum walked into Youngstown State University’s Beeghly Center early Sunday morning. While he showed up in preparation for a conference clash against the University of Wisconsin-Green Bay that afternoon, he wasn’t the only one in the building getting ready.

Slocum noticed the sound of a basketball hitting the Dom Rosselli Court over and over again. He walked through the gymnasium doors and witnessed junior guard Blake Allen shooting, dribbling and shooting some more.

Allen scored a career-high 27 points in a win over the University of Wisconsin-Milwaukee on Friday. On Sunday evening, he led the Penguins with 16 points in a 30-point victory over the Phoenix.

Allen was rewarded for his 43-point weekend with the Horizon League Player of the Week title, the fourth YSU men’s player to win the award this season.

Slocum said in a press conference on Monday that Allen has spent more time in the gym than has ever been asked of him.

“There is nobody in our program and nobody that I’ve coached that works harder than Blake,” Slocum said. “I’m very happy for Blake because what you put in you take out in life, and that guy has put a lot into basketball.”

During the press conference, Allen said with a huge smile that he was happier winning the two games.

“I’d take the two wins over any individual accolade any day, but I think that just goes to speak for the depth that we have on our team,” Allen said. “We have a lot of guys that can be really, really good on any given night.”

“I think it says a lot that we’re getting the recognition from the league,” Slocum said. “All four guys that have won it have all been deserving.”

A voting panel determines the HL Player of the Week. Each team’s sports information director selects one player from each sport.

Nomination deadlines are Mondays by 10 a.m. The award is based on an individual’s performance during the week.

Ward won for the week of Jan. 2-8 after scoring 43 combined points that influenced two victories. Being a first-time winner, Ward said it was nice to see people notice his game.

“I never really felt my game was respected in the Horizon League, but to win player of the week, it means that people around the league really notice my game and the way I play it,” Ward said.

Eargle won at the beginning of the season after compiling 20 points and 10 rebounds at Cleveland State University on Dec. 31. He also ranks first in the HL and fourth in the NCAA with 4.2 blocks per game.

Eargle said winning the award was a good feeling because he helped the Penguins snap a four-game losing streak.

“After that win, it seemed like we all grew together because they are one of the best teams in this conference,” Eargle said.

Brooks was the first men’s player to win the award in late November.

He averaged 20.5 points per game from Nov. 28 to Dec. 4 on the road and made nine 3-point field goals as the Penguins defeated the University of Detroit Mercy but fell to Wright State University.

The two games helped Brooks break out of a 12-51 shooting performance through the first five games.

“It was exciting because before that week I was shooting the ball pretty badly, but I was playing well defensively,” Brooks said. “Coming into that game, I was just more focused on trying to get my shots go in and not worry about anything else.”

The only men’s basketball player remaining is sophomore Kendrick Perry, who ranks fifth in the HL with 14.4 points, third with 4.3 assists and second with 2.2 steals per game.

Eargle, Brooks, Ward and Allen said they are not worried because his time will come.

“Obviously, he’s been tremendous all year for us, and I wouldn’t be surprised at all if he won it every weekend for the rest of the year,” Allen said.

In women’s basketball, sophomore Kenya Middlebrooks won for the week of Dec. 12 when she collected a career-high 27 points and scored 13 of the team’s final 16 in a win at the University of Akron.

Middlebrooks said she doesn’t think too much about it.

“The team just basically gave me the ball, and I just hit some crucial shots towards the end of the game,” she said. “Helping the team out is basically what it means.”

Women’s head coach Bob Boldon said he wants to postpone celebrations until the season’s end so that the team won’t be distracted, but he is happy nonetheless.

“For me, I’m just happy with the kids because you watch especially Ken put the work that she’s put in,” Boldon said. “To see a kid like that put in the work she’s put in, you like to see them rewarded for their work.”

The other women’s basketball player to win an HL award this season is junior Brandi Brown with the conference preseason player of the year.

“I think any of my teammates can be named player of the week,” Middlebrooks said. “I think they’re all great players in that sense.”

Outside of basketball, three other YSU student-athletes won the award at one point or another this year.

Samantha Hamilton won for the week of Jan. 9 after placing first in the 3,000-meter run at the Akron Open. She finished with a time of 9:53.58, which is a school record.

Hamilton said the award is a way to identify an athlete’s accomplishment.

“It recognizes the different accomplishments that all the runners do, and it’s not always about who ran the best that week or who posted the fastest time,” Hamilton said. “It’s just a way to recognize, like, some of the better athletes like every week.”