What started as a man brewing coffee in his garage as a hobby has evolved into a coffee company that has established two locations and is continuing to expand. 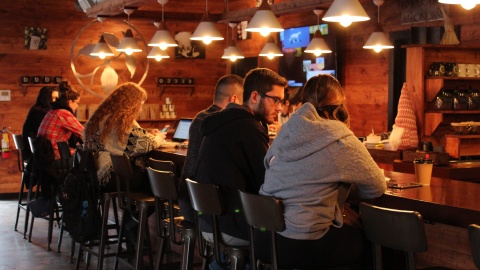 As a Youngstown native and alumnus of Youngstown State University, Langenheim made it his goal to open a location in Youngstown for YSU students and the community to enjoy.

“This city is essentially my stomping grounds,” he said.

Hunter Dorman, who has been a barista with the company since it began, said she has enjoyed seeing it grow over time.

“It’s been a really good experience,” she said. “I’ve met a lot of really good people and learned a really cool trade.”

“Rust Belt” and “Steel City” are two coffee options that are sold at the shop. Langenheim said growing up in Youngstown influenced the company, so he named specialty coffee drinks after terms associated with Youngstown.

“Downtown is coming back, we’re proud to be a part of it,” he said. “Essentially we’re here to do our part.”

The on-campus location is set up like a bar, with a long table surrounded by chairs. Langenheim said that was intended so people can go in groups or alone without feeling out of place.

“The space is built so you can go in individually and feel comfortable [and] communicate with people who are friendly,” Langenheim said. “There’s nothing worse than going into a big restaurant and you get a table that’s meant for six people, and you’re by yourself.”

He hopes that Stone Fruit will become a hangout spot for students at night.

“You can be in college at [age 17] now,” Langenheim said, “There’s not a lot to do down here on a Friday or Saturday night, because you can’t go to the bars. Everybody is too young [for that], so that’s why we made a bar.”

Store Manager Christian Powers drew artwork along the chalkboard walls of the bar, which he has done in each Stone Fruit location. The wall art will be changing throughout the year to match the seasons.

Stone Fruit just opened three weeks ago and feedback has been generally positive. Dom Haniford, a regular at the coffee bar, said the quality of coffee and the nice employees keeps bringing him back.

“Josh does a really nice job with them,” Haniford said. “They’re friendly, they’re awesome and I always like coming in and talking to them.”

Langenheim said business has been high despite the construction on Lincoln Avenue, but business during winter break is up in the air.

“We’re hopeful that we can attract the Federal Street clientele,” Langenheim said.

Another location is being built at Firestone Farms in Columbiana. Langenheim said they will continue to grow as the opportunity arises.

“If the opportunity’s there, no matter how hard it’s going to be, we’re going to chase it,” Langenheim said.