YSU Student Lands Another Minor Role in a Major Film

A Youngstown State University student hit the big screen on Friday, appearing in the horror film “The Bye Bye Man.”

Laura Hughes, a communications major, plays a character in the film. She has been an extra in eight other films, but this was the first major film where she played a featured role.

“This is the longest screen time that I’ve ever had,” Hughes said. 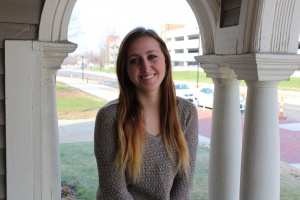 Going in, Hughes said she knew nothing about “The Bye Bye Man” aside from the title.

“You have to kind of piece it together on your own, especially me going in as an extra and getting a featured part, I had to figure out a storyline of some sort to get into character,” she said.

Hughes appears in eight scenes of the film and said it’s unbelievable how many times a scene has to be filmed before moving on to the next.

“The first scene of ‘The Bye Bye Man’ that I was in was a party scene,” Hughes said. “They switched it up, but I was in that room for a hundred different scenes.”

This has been the case in all films Hughes has acted in, including her portrayal as a zombie in “Night of the Living Dead: Rebirth.”

“I had to eat some guy’s leg for like three hours,” Hughes said. “It’s insane the amount of times they record stuff just because of one little tiny thing in the background.”

Hughes began appearing as an extra in films when she was 15 years old. The films varied in size, from low-budget independent films to massive productions such as “Fast and Furious 8.”

“In the first movie I was in, I met a lot of awesome people who got me involved in other agencies for other movies,” Hughes said.

Minor roles in high-budget films still get the star treatment, such as having hair and make-up done by professional stylists and artists, Hughes said.

“You get treated like royalty no matter what your part is,” Hughes said. “You go in expecting nothing, so when you get more, it feels better.”

Hughes met various actors from the films she’s worked on, including Will Smith on the set of “Concussion.” She said she expected the actors to be unfriendly in real life, but has been pleasantly surprised.

“You would think they are [rude] just because that’s the way people imagine them to be and they’re not,” Hughes said. “Will Smith is absolutely awesome.”

Hughes attended “The Bye Bye Man” premiere and was pleased by the finished product.

“Unless you’re on set the whole time, you don’t even know what’s next in the movie because half the time they film them backwards,” Hughes said. “Seeing it all come together, I was really impressed.”

She said she would like to be an extra in more films in the future, but she isn’t looking for a career in acting at this point.

“I love doing it, but at this point in my life I’m more promised a career going to school unless someone actually confronted me,” Hughes said.

People have been very supportive of her role in the film, something that Hughes did not expect.