Looking for something to do on St. Patrick’s Day? Go no further than downtown Youngstown for green beer and a fun-filled holiday.

Rinehart said the Burke School of Irish Dance Bagpipers will perform and there will be other surprises throughout the day. There will be no cover charge for these festivities.

Rinehart said to create the Irish pub aesthetic, the furniture and furnishings were imported from Ireland. The highlight is a set of stoned carved angels rescued from a 15th Century Church in Dublin. 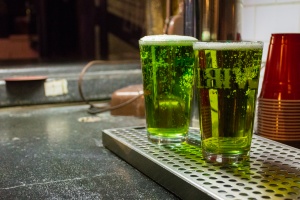 Rinehart said O’Donold’s has become the unrivaled destination for St. Patrick’s Day and the weekends before and after the annual holiday.

“It is the largest party based on alcohol sales in the state of Ohio,” Rinehart said.

He said most activities are free.

Joe Thomas, an owner of Whistle & Keg, said they will have traditional Irish food and the events will begin at 8 a.m.

“[It] will go until whenever it runs out, but we’ll have a traditional Irish breakfast then lunch item. We’ll also have a full shot bar, which is typically just beer and wine and liquor as well that evening,” Thomas said.

Thomas said they are putting on these events to be a part of the sixth annual Shamrock the Block Party downtown.

“We’re extending our patio throughout the day to offer more sitting area outside and we wanted to make sure we had food and drinks that would correlate with St. Patrick’s Day,” Thomas said.

Thomas said people should attend because Whistle & Keg offers the best selection of beer in downtown and the Youngstown area.

“What’s better on St. Patrick’s Day than beer? We have the best,” Thomas said.

Thomas said they will offer green beer, Guinness and a number of craft Irish beers that they will have on tap.

“That is a collaboration of The V2 Wine Bar and The Federal in the middle of Federal Street. There will be a tent, a full bar, a beer truck, there’s food outside and live entertainment all day.” Deckand said.

Decked said admission is free for people 21 and over. He said participating in downtown activities is a great way to support the community.

“It’s a good way to bring people downtown, keep them downtown and keep the development going down here,” he said.