The Youngstown State University bowling club was established in 2003 and is one of the longest standing club sports teams at YSU.

The club travels and competes competitively against club and division one teams. Although, there is an option for students to not compete and only practice with the club.

This year was the club’s 15th season competing with not many accomplishments coming forth.

YSU’s Bowling Club President, Cassidy Lindberg, is a junior majoring in social work and has been bowling for the last 16 years. At age 5 she started bowling in junior leagues and continued throughout her childhood. During her time at Austintown Fitch High School, she bowled all four years.

Lindberg has been bowling club president here at YSU for two years and said she plans on returning for a third year during her senior year.

“At the end of my freshman season, the president at the time stepped down and our coach then nominated me and encouraged me to try it,” Lindberg said. “I accepted and have held the position since.”

When appointing certain positions in the club, such as president, nominations are taken and voting among the team begins.

Lindberg said all sports clubs on campus are formed by gaining approval and filling out proper paperwork in the department involving club sports.

“There are also specific requirements needed to be a club,” Lindberg said. “This includes staying as a club each year.”

The bowling club doesn’t receive much attention and Lindberg said she would like if it did.

Club sports do not have any financial ability to offer scholarships, and Lindberg said she believes this is why many students choose not to pay attention to club sports.

“We have to aim at local bowlers already planning to attend YSU because of this,” Lindberg said. “Finding members who can handle the commitment can be hard.”

The bowling club travels to compete and this means spending a large amount of time with teammates.

“We travel to tournaments in many states and spent a week in Nashville, Tennessee, over spring break for a tournament,” Lindberg said. “Traveling together so much causes you to become close like a family.”

During Lindberg’s freshman year at YSU, the bowling club was ranked 19th in the nation for winning a tournament. This ranking is the highest any bowling team at the university has achieved.

“These tournaments are usually two days,” Lindberg said. “Usually these consist of 10 to 40 teams and have five to six individual games on Saturdays while Sunday has 20.”

Jordan Ustaszewski, senior chemical engineering major, is a member of the bowling club and has been bowling seriously since his freshman year in high school.

“I’ve always enjoyed bowling competitively,” Ustaszewski said. “I thought this club would be a perfect fit for what I wanted to do.”

Ustaszewski assumed a leadership role as treasurer for the club and said he has learned leadership, responsibility and organization.

“Until I joined the club, I hadn’t really taken on a firm role of leadership and being in charge,” Ustaszewski said.

Similar to Lindberg, Ustaszewski said he wants more attention to be given to bowling.

“I think the university as a whole does a poor job at promoting the club,” Ustaszewski said. “I think a lot of people on campus don’t know about YSU’s club sports or what they are.” 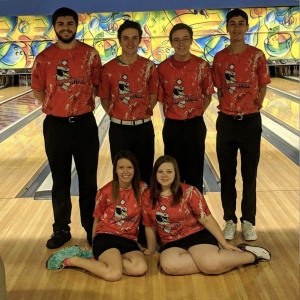 Lindberg said she believes most people aren’t aware of the Division I bowling team on campus.

“I feel we would be able to recruit more members simply if the club got more attention on campus and more students were aware of the bowling club,” Lindberg said.

Ustaszewski said one problem is the commitment level the club requires

“We practice at least twice a week and travel several hours while being out of town a lot,” Ustaszewski said. “It can be very intimidating.”

Wiesen said he heard about the bowling club through friends and decided to join during his first year.

One thing Wiesen said needs to be done for the bowling club is getting a coach.

“If we had a coach, I believe more things could come out of this experience,” Wiesen said.

The club is a co-ed team, but compete in the men’s division when at tournaments.

YSU’s bowling club has gained many successes over the seasons it has been in existence. Those of which include high standings and winnings.

The Warrior Classic Tournament in Michigan was the first tournament of the season. Lindberg averaged 185, while finishing 20th in the men’s division out of 92 individuals.

The Striking Knight Classic was held in Kentucky. At this tournament, Ustaszewski and Miller averaged 166 tying in 33rd place out of 88 individuals.

Ustaszewski averaged 164 placing 17th at the Saints Classic in Kentucky, as freshman Larry Sudano averaged 163 placing 18th out of 40 individuals.

During the team’s individual sectional tournaments, Sudano averaged 181 placing 97th out of 175 individuals.

Sudano and Ustaszewski were individually awarded academic awards for holding a three point five or higher grade point average throughout the bowling season.

“Bowling can be a rewarding experience and even if you are not good at it, putting in some work can help you improve quickly,” Ustaszewski said.