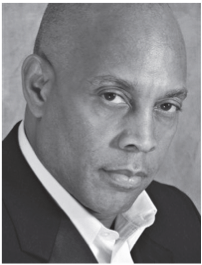 In May of 2011, communications professor George McCloud was traveling through China. A dust storm grounded his flight, stranding him at a Beijing airport with nothing to do for hours.

While waiting in line to change his ticket, McCloud struck up a conversation with the man standing next to him — another American, who was lecturing in China. McCloud quickly learned that the man he was speaking to was Ray Charles Robinson Jr., son of music legend Ray Charles.

“I’m always on the lookout for people that I think would be good speakers for the Skeggs lectures,” said McCloud, who serves as president of the Skeggs board. “[Robinson] talked a lot about character and education and the work he was doing with his charity. I filed him away in the back of my mind as someone who would make a great Skeggs speaker.”

The two men exchanged contact information before they parted company. McCloud contacted Robinson later that year to ask him if he would participate in the Skeggs Lecture Series at YSU, a request Robinson was happy to fulfill.

Robinson’s father, Ray Charles Robinson, universally known by his shortened stage name of Ray Charles, pioneered the genre of soul music in the 1950s. His musical style fused elements of blues with gospel and helped define the stylistic niche he carved out for himself.

His most important contributions may have been his success with crossing the racial boundaries of the time and helping to integrate black music with mainstream music.

Robinson, the eldest son of Ray Charles, honored his father and namesake with the 2010 memoir “You Don’t Know Me: Reflections of My Father, Ray Charles,” which won the 2011 NAACP Image Award for biography/autobiography.

The book takes an intimate look at the man behind the music from the perspective of someone who lived through all of Ray Charles’ triumphs, musically and socially, and his tribulations with substance abuse, illness and blindness.

Robinson also founded the Ray Charles Jr. Foundation for America, a public charity with the mission of implementing meaningful social change for economically challenged individuals and communities across America.

He chose his father’s name for the foundation, in part, due to the lasting effect Ray Charles’ music has had on racial equality.

Robinson is scheduled to speak to YSU students and faculty as part of the Skeggs Lecture Series on Thursday at 7:30 p.m. in Kilcawley Center’s Chestnut Room. The topic of his lecture is “Character, Education, Self-Reliance and Intellectual Independence.”

Robinson will also attend a performance by the weekly ensemble of jazz students at the Butler Institute of American Art at noon on Thursday. All of the pieces to be performed are songs written or made famous by Ray Charles, but YSU students or alumni have arranged all of the versions.

Kent Engelhardt, coordinator of jazz studies and associate professor of jazz at the Dana School of Music, said he is looking forward to Robinson’s visit.

“This is going to be a great tribute to the lasting legacy of Ray Charles,” Engelhardt said. “They’re going to play some of the songs that Ray made famous, but these versions are 21st century adaptations by modern jazz musicians. It’s almost like they’re playing YSU versions of Ray Charles songs.”

Mark Higgins, a saxophonist and YSU music performance major, arranged “Georgia On My Mind,” a Hoagy Carmichael song that Ray Charles made famous in the 1960s.

“I listened to Ray Charles a lot in high school,” Higgins said. “So it’s really exciting to get to meet his son and pay tribute to his music. My arrangement retains all the original parts, but incorporates some modern themes and techniques.”

Robinson is also an independent film producer. He co-produced several specials about his father and earned a co-producer credit for the 2004 film “Ray,” starring Jamie Foxx.

Robinson will attend a screening of “Ray” at 2 p.m. Thursday in Williamson Hall’s auditorium and will be available for a Q-and-A session after the movie.

He is scheduled to participate in a book signing at Williamson Elementary School in Youngstown at 10 a.m. on Wednesday. He will talk to students about the importance of character and community.

The Community Foundation of the Mahoning Valley has purchased 200 copies of Robinson’s book for him to autograph for students.