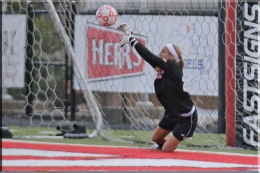 Jackie Podolsky makes a save during the Sept. 29 victory against the University of Wisconsin-Milwaukee. With a 7-7 record, the YSU soccer team will play its final two games this week. Photo by Dustin Livesay/The Jambar.

Although the Penguins hold a 7-7 record — a school high in wins — and are 2-3 in conference play, they sit two games behind the leader, the University of Detroit Mercy.

Still, head soccer coach Will Lemke has a simple request for his team.

“Play playoff quality soccer,” Lemke said. “If we go out and play our best over these next two weeks, I’ll be happy.”

YSU sits in sixth place in the conference standings, and the Penguins’ final two games are against opponents with better conference records.

On Wednesday, the team will take on Detroit at 4 p.m., while YSU will host Wright State University on Saturday at 1 p.m. The latter game will end the team’s regular season.

Lemke said his team must play physical and stay focused in order to come away with victories.

“We have to take it one day at a time and focus on the preparation,” Lemke said. “We have to come out with intensity, win 50-50 balls and play our game.”

Lemke added that the team must approach these two games with a “playoff mentality.”

“We’re coming down to the mix, and every team has a chance to get into the playoffs,” he said. “We’re facing two quality opponents who are similar.”

The Penguins are toward the top of the conference in multiple categories.

Meanwhile, freshman goalkeeper Jackie Podolsky recently won the title of Defensive Player of the Week for the week of Oct. 15-21. In YSU’s 1-0 win on Saturday against Valparaiso University, Podolsky recorded a career-high seven saves in her first-ever shutout.

“They’ve been playing better each year, and they finally broke through this year,” Lemke said. “We’ve started to level off and be more consistent as a team, which is incredible considering we start seven first-year players.”

“Whether they are playing bad or good, they are either battling back or finishing strong being resilient,” he said. “Our finishing has gotten better, and we find ways to get the ball in the back of the net.”

For the Penguins to make the conference tournament, they must finish in their current spot — sixth place — or higher.

“I tell the girls to take things one game at a time. Each day, you move forward. There’s more success to be had,” Lemke said. “As a team, we have to set ourselves up for the future, focus on the next task at hand and reap the benefits of our success.”