A Youngstown State University student-parent said she has noticed a lack of on-campus resources for herself and her child.

Kaitlyn Wieder, a sophomore early childhood education major, has a six-month-old son named Carter who has Down Syndrome.

During her pregnancy, Wieder said she didn’t find any parent support groups at YSU. Rather, she found other pregnant students who would get together and lean on each other for support, but nothing run by the university.

She said she thinks YSU student-parents could benefit from having an on-campus support group where parents can talk about their struggles and help each other.

Wieder said she didn’t know her son had Down Syndrome until after he was born, and she planned to enroll in classes for the fall 2018 semester, but because of the extra care he requires she took the semester off.

“There was no testing done that indicated that he had Down Syndrome. Everything came back normal,” she said. “When I found out, because I’m majoring in early childhood education and minoring in special education, I knew he was meant to be.” 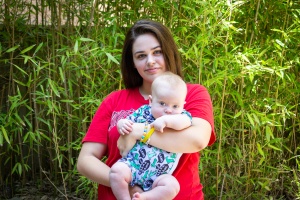 A hospital pediatrician told Weider the her son might have Down Syndrome the day after he was born, based on small indicators such as his toes having a gap, a crease in his palm that goes all the way across the hand and extra skin on his neck.

Weider’s son is part of the Down Syndrome Association of the Valley, which she said has resources for parents and has helped her find a sense of community among other parents in similar circumstances.

Although DSAV is geared more toward the kids, the organization helps parents arrange support groups and has a library that parents can check out books from.

Weider said she plans to take night classes for the spring 2019 semester so her parents, who help her take care of her son, can watch him when they come home from work in the evening.

She said being a new parent can be scary, but she’s decided to take things as they come and not worry about the future and encourages other new parents to do the same.

“Just because you have a baby at a young age doesn’t mean you can’t go back to school and do what you dream to do,” Weider said. “For parents with a child with disability, I would say continue to set your goals and don’t let it be a setback.”

The Student Government Association President Ernie Barkett said as far as he knows, there aren’t any resources on campus for student-parents, and more specifically for parents like Weider who have a child with a disability or special needs.

“With disability services, they only cover registered students so that doesn’t trickle down to their children or spouses.”

This was confirmed by Gina McGranahan, assistant director of disability services.

Barkett said he and Executive Vice President Caroline Smith plan to meet with the administration at Maag Library to start a family area equipped with toys and soft mats, where parents can take their children during class breaks.

“The library administration was really receptive to our emails about finding a space available. We are going to do a walk-through,” he said. “We hope to find a space.”

Although SGA wants to open a child-friendly space on campus, there are no plans to turn it into a day care.

“I don’t think the effort is to make it a day care,” Smith said. “People won’t be there to supervise your children, but if you wanted to bring them there to decompress that would be the space to do it.”

SGA was inspired to find a space for student-parents after they received complaints at their town halls the past two years for not being a parent-friendly campus.

Barkett said SGA has tried to address part of the issue by installing baby changing stations over the summer and making sure there are a few in each building.

SGA is hopeful there will be a family space at YSU before the start of the spring 2019 semester.

Resources to Utilize On and Off Campus

Nicole Kent-Strollo, director of student outreach and support, said although there is a lack of devices on campus for student-parents, there are resources in the community that she can connect students with.

In regards to students with children, the scope varies depending on each situation.

Kent-Strollo said when a student-parent comes or is referred to her office, it is important that she connects them with resources but also an understanding of they are not the only one going through the circumstances.

“I always emphasize to the students: if you don’t get anywhere make sure you come back to me, because I’m going to assume that you found the help you were looking for,” she said.

Kent-Strollo said the SGA student food pantry and the career closet are incredible resources for any students but specifically students who have found themselves in a situation where they are not just paying for themselves anymore.

Resource Mothers in Youngstown, a program affiliated with Mercy Health St. Elizabeth Hospital, focuses on assisting pregnant women and women who have a baby a year or younger, and, the affiliated support group Empowering Moms is available for as long as the parent chooses to participate.

“The whole point of it is to connect [mothers] with other people in the same situation. They teach moms how to cook, balance a checkbook and talk about different topics they would be interested in,” Kent-Strollo said.

We Care Day Care Center and the YWCA in Youngstown, both within walking distance of campus, offer aid to new parents.

Kent-Strollo, the YSU liaison for We Care Day Care, said the day care employs many YSU students and students and faculty alike take their children there.

YSU Little Penguins Preschool and Day Care is run by the Mahoning County Educational Service Center and although not affiliated with YSU, offers child care based on income.

“YSU education students also have the opportunity to student teach and observe in the classrooms,” she said.

Kent-Strollo said the student outreach and support office hopes to connect students with other people who are in the same situation.

“I think there’s probably more resources around here than we realize but it’s about how you connect with them,” she said.  “It’s so important to know that you can come to this office it’s absolutely okay for anything that you need. We will get you to the right place.”