Simeon Booker was a civil rights journalist well known for his coverage of the Emmett Till murder and trial. In 2016 the Simeon Booker Award for Courage was created as a part of Non-Violence Week in Ohio. This year, Ken Nwadike Jr. was the national recipient and Terry Vicars was the local recipient the award.

This year marked the seventh annual Non-Violence Week of Ohio and the second year for the award to be given out. In 2013 at the request of students from Mahoning Valley Sojourn to the Past, Governor John Kasich signed a bill into law declaring the first full week of October as Non-Violence Week. 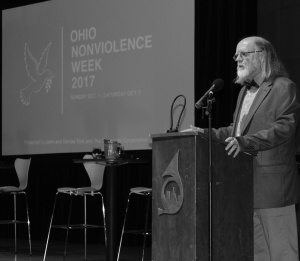 On Tuesday the DeYor Performing Arts Center hosted an assembly where the recipients of this award as well as Booker were honored. A panel discussion was also held and topics such as peace and race were discussed.

Nwadike, also known as “Free Hugs Guy,” is a peace activist and the founder of the Free Hugs Project. He is the national recipient for the Simeon Booker Award for Courage this year for his efforts to reduce violence.

Nwadike has been to many riots and protests nationwide, promoting peace and offering hugs. He greeted runners at the Boston Marathon as they crossed the finish line the first year after the tragic terrorist attack.

In his attempts to reduce violence, he has done his part to reduce tensions between police officers and protestors.

“In the ’90s experiencing riots, the Rodney King riots that took place there at such a young age … it really left such an impression on me even as a boy, to know that I wanted to make a difference,” Nwadike said.

Nwadike said he was able to get to this point of his life because of people like Vicars.

“[My mom] never would have guessed that her baby son who was living in this homeless shelter would grow up to be on the front lines of riots and protests, trying to deescalate violence, and so much of that was the work of people like Terry,” Nwadike said.

Vicars is the local recipient of the 2017 Simeon Booker Award for Courage and has worked with the homeless and the less fortunate for over 20 years. 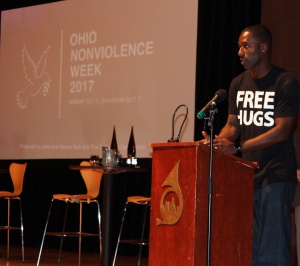 “I want to say a word about the young families that I get to work with on a daily basis. Many of my young single clients are mothers … when they walk into my office I am inspired every time that they sit down, tell me a story of what they’ve been through and how devoted they are. Their kids, their children, are not going to go through what they went through,” Vicars said.

During the event Youngstown State University student Sarina Chatman spoke, who is also the very first recipient of the Simeon Booker Scholarship.

“The Simeon Booker Scholarship allowed me to pick up my minor in French, it supported the books I needed for the semester so I can continue to be an agent for justice on YSU campus,” Chatman said.

The panel discussion was titled and focused on “Intolerance in Today’s America.” It was made up of three panelists: Anita Gray, regional director of the Anti-Defamation League in Cleveland, Wajahat Ali, a host and consultant for the U.S. State Department and Nwadike. It was commentated by YSU Professor Tiffany Anderson.

Questions about race, violence and today’s society were asked to the panel and each were given a chance to respond.

Gray ended her remarks by saying, “I think the more you get to know the ‘other,’ the richer your lives will be and the happier you will be.”