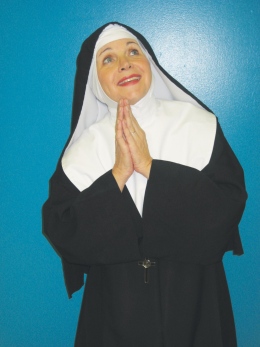 In 1985, while Dan Goggin was premiering “Nunsense,” Cindy Williams was making a name for herself as an actress beyond her trademark character as Shirley Feeney of “Laverne and Shirley.”

Goggin, the writer of “Nunsense,” is now in the middle of the seventh musical in the series, “Nunset Boulevard.”

“Nunset Boulevard” will make a stop in Youngstown on its countrywide tour, landing at Stambaugh Auditorium on Nov. 11.

Goggin based the characters in the musical off of the nuns who taught him as a child. What started out as a line of greeting cards Goggin and his friends sold in Greenwich Village, N.Y., transformed into inspiration for a comedy staring nuns.

Goggin and Williams began working together when she stared as Mother Superior in “Nunsense.”

He said working with her has been great because of Williams’ experience in comedy.

Williams, who was unable to do an interview because she’s participating in the “American Graffiti” reunion, told Goggin that, if they can make each other laugh, they can make an audience laugh.

“I think that people will be amazed that she can sing. She doesn’t think she can dance, but she can,” Goggin said.

Williams told Goggin that her goal is to perform “Nunset Boulevard” and “not miss a step.”

The series follows the adventures of five “zany” nuns. Goggin said audience members don’t need to be familiar with the entire series to enjoy “Nunset Boulevard.”

The musical is about five nuns who perform live stand-up comedy. They’ve been invited to Hollywood to perform at what they think is a grand spectacle, though it ends up being a show at a bowling alley. They then notice a casting call across the street from the bowling alley to play Dolores Hart, a real-life actress who became a nun.

The tour started on Oct. 1, and Goggin said the audience has been responding enthusiastically.

The musical also incorporates audience involvement with a segment called “The Price is Righteous,” where audience members can win prizes.

Worldwide, the “Nunsense” series has had 10,000 productions and is stopping at 53 cities on this tour.

Goggin, who studied music, also wrote the transcript and all the music for the series.

“It really fell into place. I just started writing and just let the characters do the talking,” Goggin said. “I know these characters so well, and it’s easy to write for them.”

He said the series has nothing to do with religion and is fun for everyone.