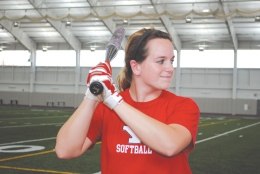 Since freshman Brooke Meenachan began playing T-ball, she has wanted to play softball in either of the Carolinas.

While that dream has yet to come true for the Boardman native, Meenachan said playing close to home is still a rewarding experience and opportunity.

“That’s what I wanted since I was little, but I’m happy here because I grew up here,” Meenachan said. “It’s an honor to play where you’re from. I’m glad I chose to stay here.”

Her choice to play for the Penguins gave her the chance to taste some southern baseball during the team’s 16-game road trip to North Carolina to open the season. She said it was an exciting time, and it was nice to leave Ohio.

Meenachan played softball at Boardman High School before committing to Youngstown State University. At Boardman, she was a four-year letter winner and was twice named captain.

She posted a .561 batting average with 17 stolen bases and 26 RBIs as a senior, and she won the 2011-2012 State Farm Insurance Scholarship. She also helped Boardman win three district championships.

“It was a lot of fun playing in Boardman,” Meenachan said. “I grew up with a lot of the girls since we were playing T-ball. I’ve been through a lot with them, so it was like playing with my best friends.”

“She swings well,” Campbell said. “Her adjustment period she’s going through right now may be a little faster removed from pitching and stuff like that.”

Campbell added that being a local helped the recruiting process.

“When you go [recruit], you definitely circle the wagons around your home state at first,” he said. “We go around and recruit the kids that are Division I caliber that other Division I schools are looking at, and then you’re able to expand off of that.”

The biggest challenge Meenachan has faced at the collegiate level is switching positions. She was a shortstop at Boardman, but is learning to play second base for the Penguins.

management. Instead of covering second base like a shortstop would, she has to cover first base.

“I played every position before except for second base, and a lot of people don’t think it’s different from shortstop, but the ball moves differently, and it’s a big adjustment,” she said.

Campbell said senior second baseman Kristen Philen is helping Meenachan adjust because Philen was faced with the same scenario when she began playing with the Penguins.

“The good thing with Philen being the starting second baseman is that she is able to teach her as a senior, and hopefully she takes advantage of the opportunity,” Campbell said.

One advantage Meenachan said she has over her teammates is living at home with her parents.

“I have the opportunity to see my family every day,” she said. “My mom cooks them meals sometimes, so it’s a lot of fun when they come over.”

Meenachan’s mother, Kelly, invites the players over to her house for dinner every week. The freshmen are almost always there because they do not have home-cooked options in the dorms, said freshman infielder Samantha Troxell, a native of Cuyahoga Falls.

“She makes great shrimp pasta,” Troxell said with a laugh.

Troxell added that Meenachan is a competitor — but one who will help out any friend in need.

“She’s probably one of my better friends,” Troxell said.

Because Philen is the team’s primary second baseman, Meenachan has seen limited action, playing in 12 of the team’s 16 games and starting four times.

She is batting .158 with three hits and three RBIs but no extra base hits (double, triple or home run) before Wednesday.

“Well, that’s obviously not happening right now,” Meenachan said. “I don’t know if I have power, but I think I’m more of a line drive hitter.”

She visited her father before Wednesday’s doubleheader because she was struggling at the plate. She went 2-2 with a walk, a double and two RBIs.

Campbell said he is not expecting Meenachan to produce immensely right off the bat, although she is exceeding more than expected.

“She’s been in some key situations, and for a freshman, I think that that’s all you can ask for from a younger kid,” he said.