Gessler said she is excited to serve as executive vice president.

“Jacob [Schriner-Briggs] was a brilliant leader, so it’s bittersweet, but I’m trying not to see it as filling big shoes,” Gessler said.

Gessler said she is looking forward to focusing on the initiatives Orr and Schriner-Briggs developed last semester while also lending a new perspective to the administration.

Orr said she chose Gessler because the pair have complementary skillsets.

“Her and I work really well with each other,” Orr said. “The way we bounce ideas of one another has always been really effective.”

Orr said she has met with Gessler and developed some unique goals for the spring. 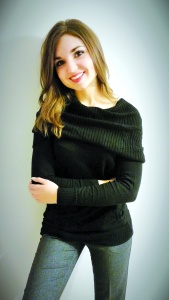 “I was asking her what are some of the things that she’s passionate about and that she would want to put on her agenda to work on rather than just her inheriting what Jacob [Schriner-Briggs] and I’s agenda was,” Orr said.

Those new focuses include looking into textbook affordability and student health services that are available on campus.

“That definitely developed our communication relationship with organizations,” Gessler said.

She also said it was extremely exciting to work with Orr and Schriner-Briggs to create a seat on SGA for international students.

“That was a huge passion of mine, and after … speaking with the students it was very apparent the need to kind of break down a barrier for them,” Gessler said. “They are some of the most brilliant students on campus, so we would just hate to withhold them from truly getting every resource they could from the university.”

Both Orr and Gessler said the transition has been seamless and they don’t anticipate SGA experiencing any growing pains.

“I definitely feel comfortable because I feel the leaders that I work with have done a wonderful job transitioning everything for me,” Gessler said.

Orr said SGA will open the spring semester discussing the use of SGA’s expanded budget with a focus on making the appropriations process easier for groups that go through it several times.

“Gabi [Gessler] and I have already sat down along with the entire SGA executive and laid out our goals for the use of the larger funds and how we best get that distributed to student organizations,” Orr said.

They will also continue pursuing student discounts through the use of a statewide letter that leverages student populations at state universities in an attempt to receive discounts from larger companies, work on integrating student suggestions regarding a first-year-experience course now that Academic Senate has approved its inclusion in the University’s curriculum next fall and hold a mental health training and efficacy day on March 25.

In addition to those — and the new initiatives Gessler developed alongside Orr — SGA is working to open a food pantry on campus and planning the transition to next year’s SGA leadership.

“Spring will hopefully be just as productive if not more productive than fall,” Orr said.