This shift in leadership was brought on by Tyler Miller-Gordon’s resignation as president of SGA in early January. Gessler said he stepped down for personal reasons.

Schriner-Briggs is familiar with the role. He served as executive vice president in the 2014-15 academic year when Michael Slavens was president, and again in the fall semester of 2015 with Ashley Orr. 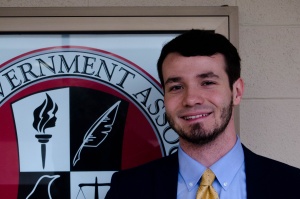 Gessler said Schriner-Briggs was selected partly because he had previous experience. She said appointing him on short notice wouldn’t cause disruptions for the body, and she already knows he is a hard worker.

“Having Jacob be able to step in with his knowledge of SGA was comforting,” she said. “We needed to be able to focus on the body and it’s well-being, make sure we are going in the right direction and start off the semester strong.”

Schriner-Briggs resigned as vice president in 2015 due to a conflict of interest when he became the president of Sigma Tau Gamma. He was eligible to step back into SGA because his term as STG president ended in December of last year.

“While there is a term limit for the president of SGA, there are no restrictions on how long someone can be vice president,” said Schriner-Briggs. He was still required to gain at least two-thirds of the body’s vote before being appointed.

Schriner-Briggs said it was a smooth transition because of the welcoming nature of his colleagues, advisers, faculty and administrators.

“It was a unique feeling coming back, but also an exciting and good feeling,” he said.

Gessler said becoming the president during this transition was an adjustment, but she has received tremendous support from the body and faculty.

“I have a lot of confidence because our body is very young but very passionate. They all have initiatives they set their eyes on and have been very vocal about starting to work on them this semester,” she said.

Schriner-Briggs said he would like to continue the initiatives that Gessler and Miller-Gordon started in the fall, such as the student food pantry and textbook affordability.

“They did great work in the fall,” he said. “If I can help Gabi finish the work that her and Tyler started without too many hiccups, and bring a lot of these initiatives to their conclusions in the next 15 weeks, that would be an optimal accomplishment.”

Gessler agreed that she would like to keep focusing on the platforms that were developed in the fall, and hopes the future leaders of SGA will carry them on. She said Miller-Gordon did wonderful work.

Miller-Gordon said it was a pleasure working with Schriner-Briggs and Gessler, and the love they have for SGA is essential to carrying out their responsibilities.

“I am more than confident that these two will carry out the initiatives that were started under the fall 2016 administration,” he said. “They will make positive, lasting changes at YSU, which will be remembered for many years to come.”

Since Gessler and Schriner-Briggs will be graduating in May, there will be a new SGA president and vice president this fall.